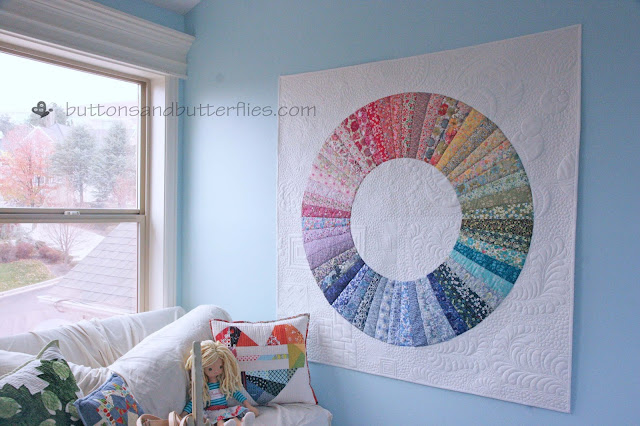 This quilt.  It has quite a story!
In 2009, I bought the book Last Minute Patchwork + Quilted Gifts at the store when I was about 12 weeks pregnant with our Jamie Lynn.
I never imagined when I picked it up that I would end up laid up a lot during that pregnancy and reading that book.  Over and over. Some of the projects gave me such a feeling of productivity by making quick quilt items when I was feeling super low and unmotivated.
It was, basically, the book that made me see that quilting might bring me solace during my grief journey.  A therapy of sorts.

The one thing I always knew is that I wanted to really make the color wheel quilt!  I always envisioned a scrappy one, but never seemed to be particularly motivated to make one because didn't really have a home for it. 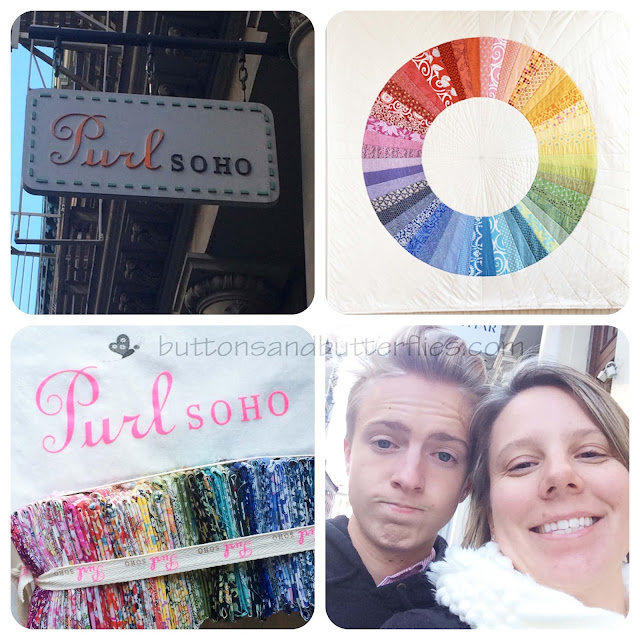 Then, on my 40th birthday, my husband sent me to New York City with our oldest son, two years ago. It's a super long story, but it worked out for him to go with me and we have now established that our family will be doing a Mother-Son trip with each of our sons when they turn 18, just like we do a Father-Son trip when they are 16.

Josh and I did all the normal sightseeing, but I had to stop at Purl Soho knowing how much that book meant to me. I also always try to pick up a little bit of fabric as a souvenir when I travel. 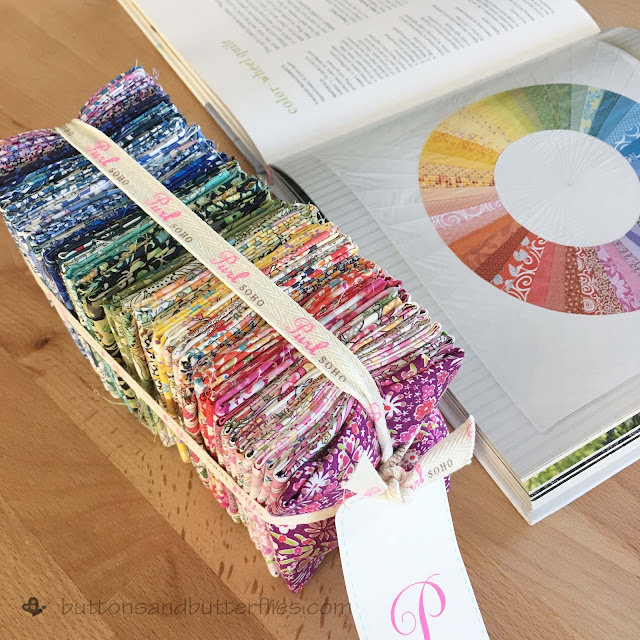 I was delighted to see that they had bundles all worked out for a Color Wheel Quilt! I chose the Liberty London bundle because we had just visited the Statue of Liberty.
And lets be real,  its beautiful! 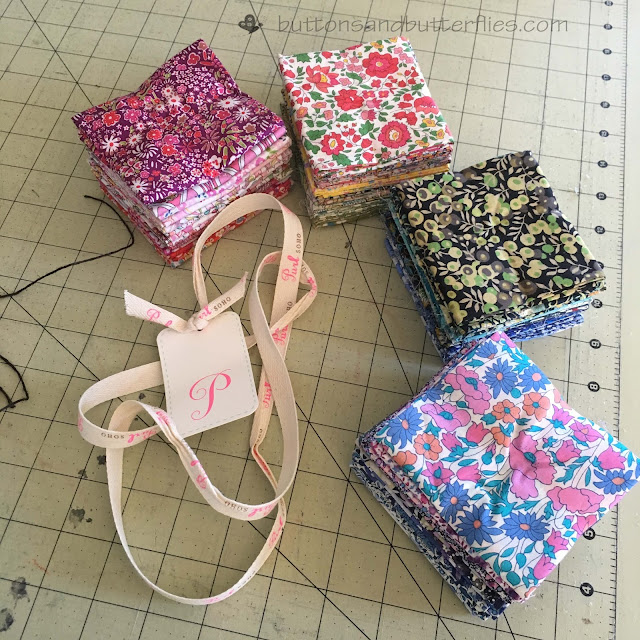 After we moved into our new home last year, I realized I had the perfect wall just for the quilt in my studio. After renovations started dying down and the dust settled? I felt compelled to finally make the quilt, one beautiful spring day.

It was painful to break up the bundle, but I persevered and cut the pieces keeping them in order. 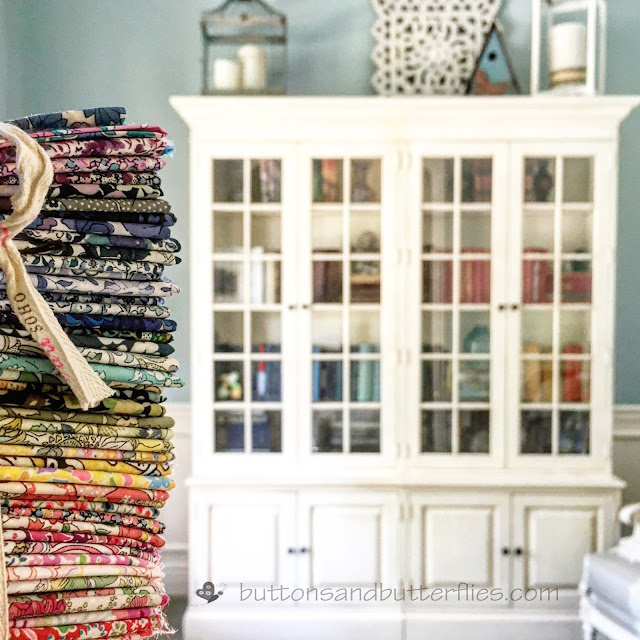 But the good news?  I still have enough to do another quilt!!!
I'm planning a Flowering Snowball for our "pretty" room since I rainbowtized my library bookcases!! 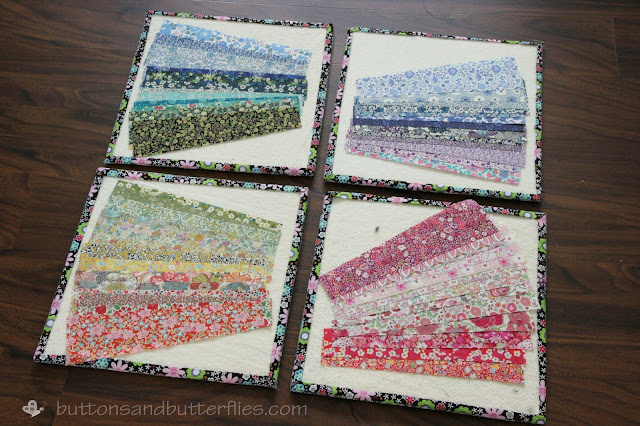 After cutting, assembly went really well.
I used Kona Snow as my background because the white finishes in my room are a soft, not harsh, white. And it seemed happier with the prints. 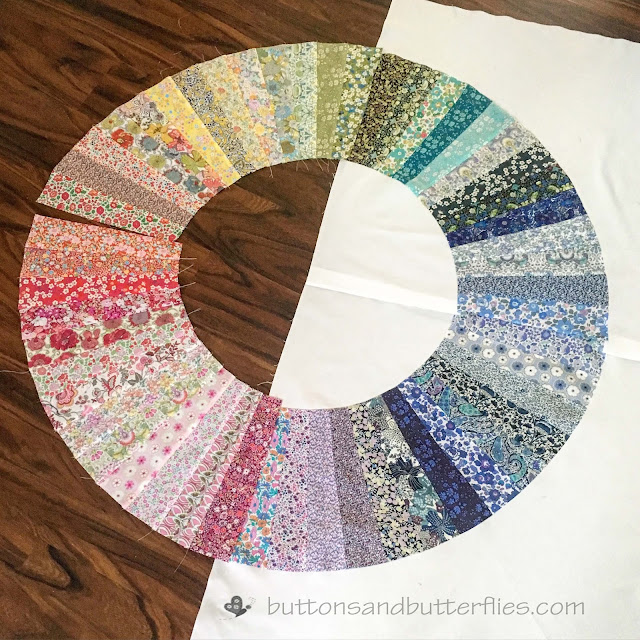 I was surprised how quickly I had a finished top! It seriously goes under the "quick" heading.
I then wondered why I hadn't started it sooner? 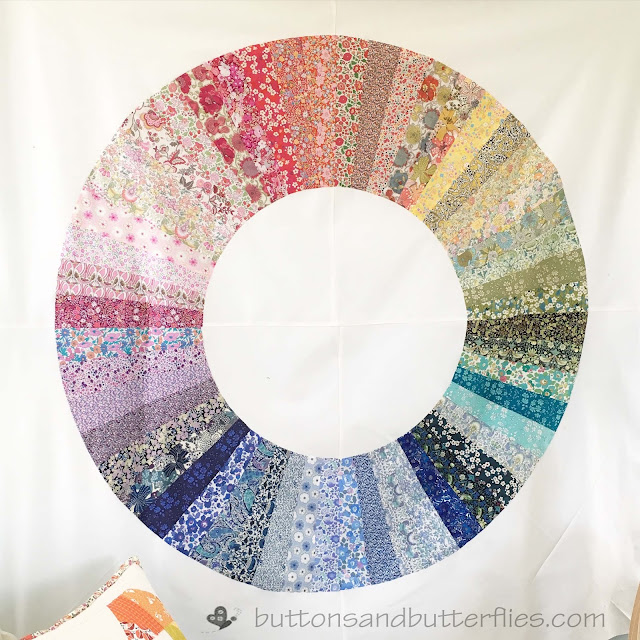 I did some quilting sketches for quite a long time.  I really wanted it to be "right" before I ever loaded it up on Ole Betsy. 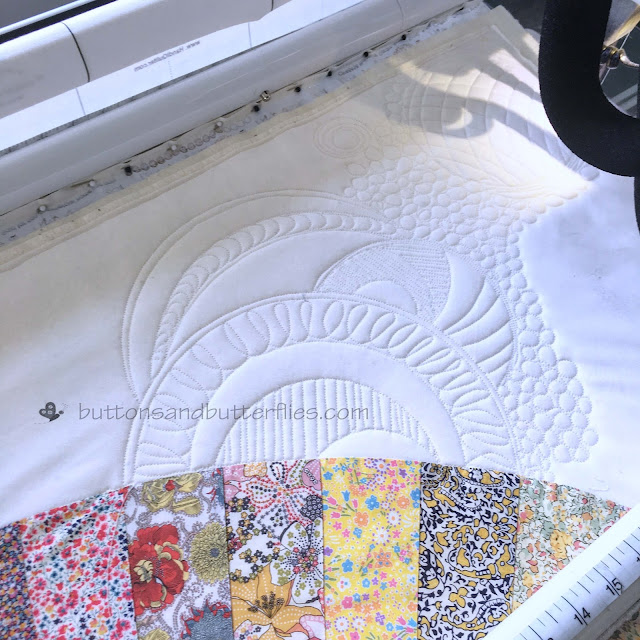 I knew right away that I wanted to emphasize the quadrants with geometric versus organic themes.  But always using pebbles as a consistent background. 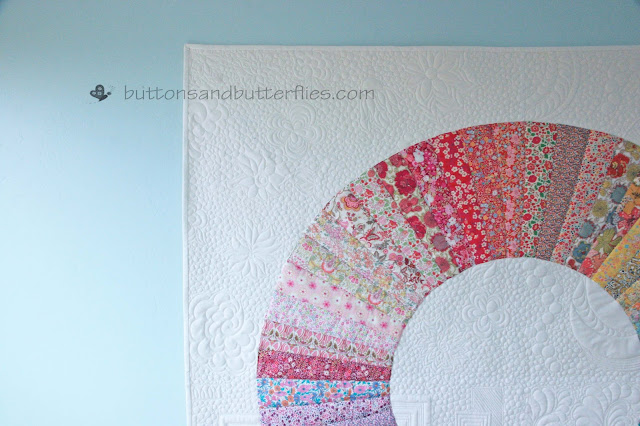 I started at the top left making free motion flowers.
Hindsight, I wish I had looked for more flower motifs and had made sure I did some really solid echo lines around them because some really got lost in the pebbles. 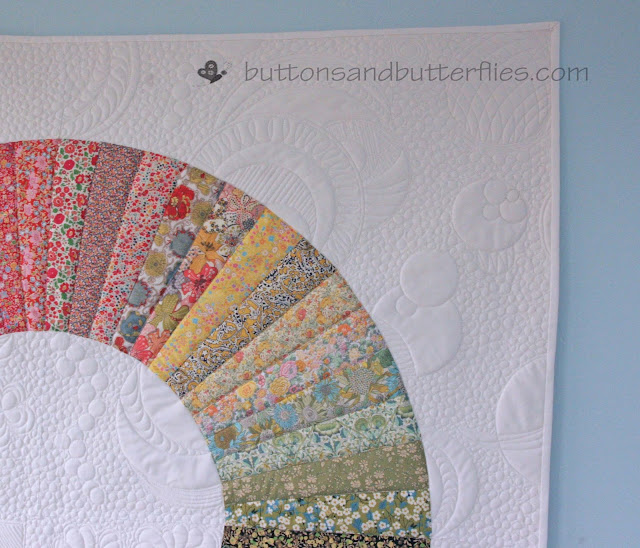 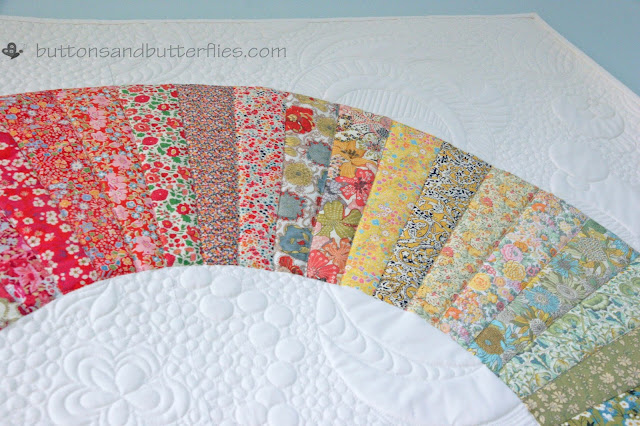 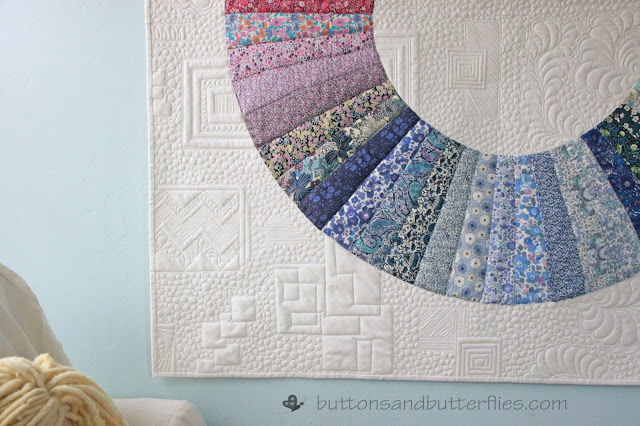 In the bottom left corner I chose squares, but with the consistent background of pebbles throughout.  I didn't really think about how tricky they would be, but I let go and tried not to be too perfect, because the more perfect I tried to be, the more wonky they got! 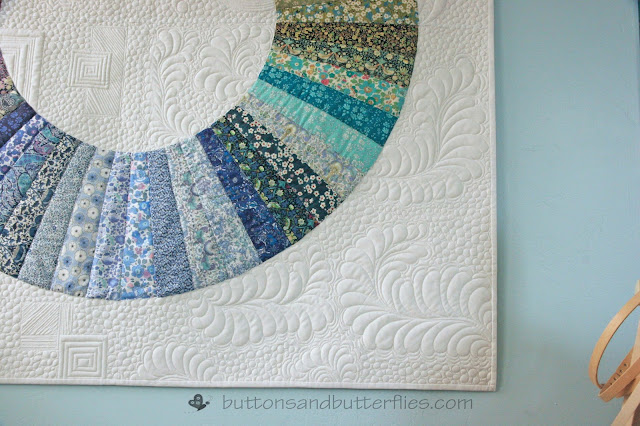 I went with feathers in the bottom right corner.
I love the nod to traditional, but the ability to make them fun and crazy. 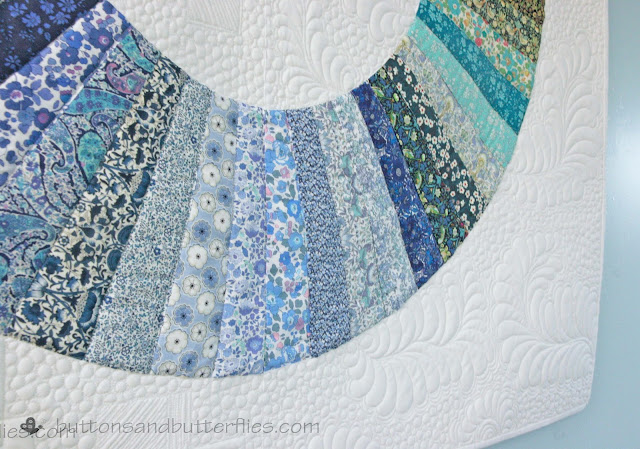 The wheel itself was a close to the seam, but not quite in the ditch quilting. 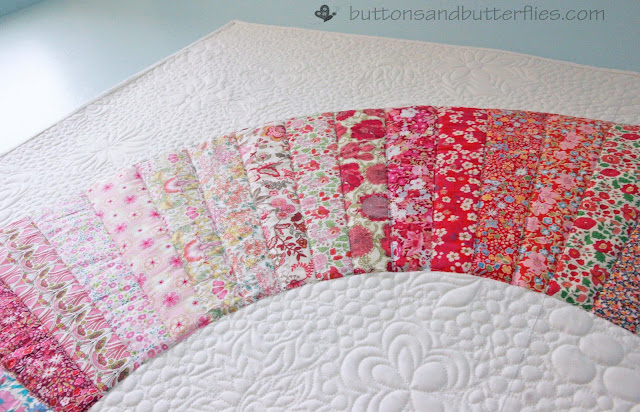 I was looking for a trapunto effect. 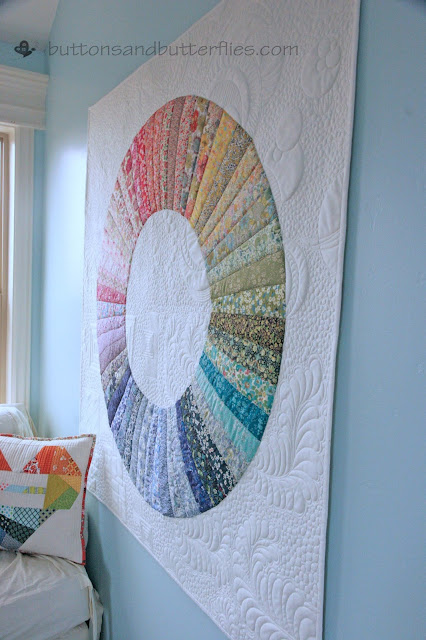 Which certainly helps when you use double batting.
It was the first time I layered two cotton battings for a quilt and I have done it again since.
I can't resist.  All the texture!!!! 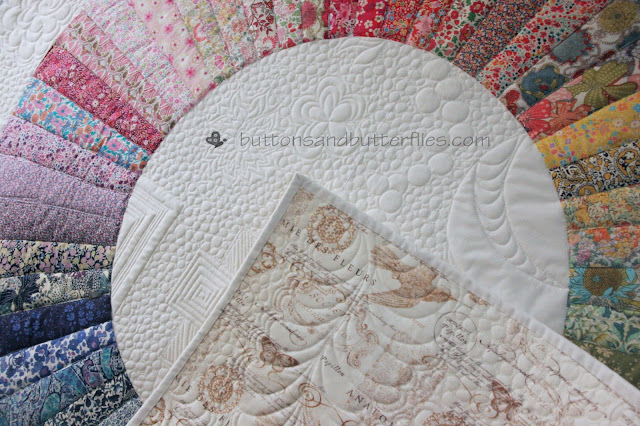 I chose a backing that was a french text/pictorial print.  I really wanted something that felt like a long ago London gal picked up some French Parisian textiles for her home.  The binding was more Kona Snow. 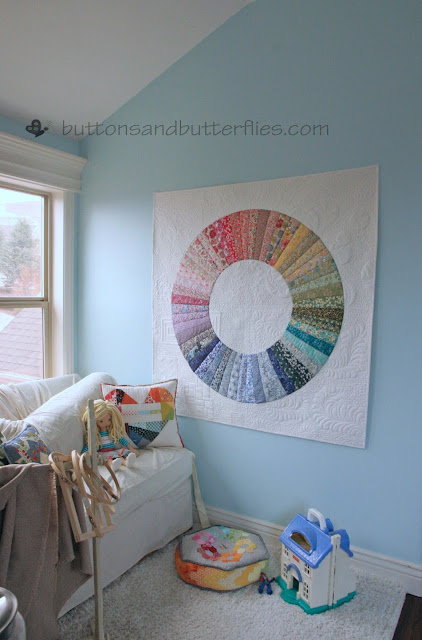 I just adore it in my sitting area in the studio. This is where Button plays (see toy house above), where I sit and unpick my quilts (a lot), occasionally do my hand-stitching and crosstitch. More often than not, where Button and I snuggle and fall asleep.

It's amazing to see it up on the wall, right where I wanted it ever since we moved in this new house. A testament to my quilt and grief journey since 2009.
Delightful, really.