Confession:  I have never made potholders ever.   Never.  Ever. 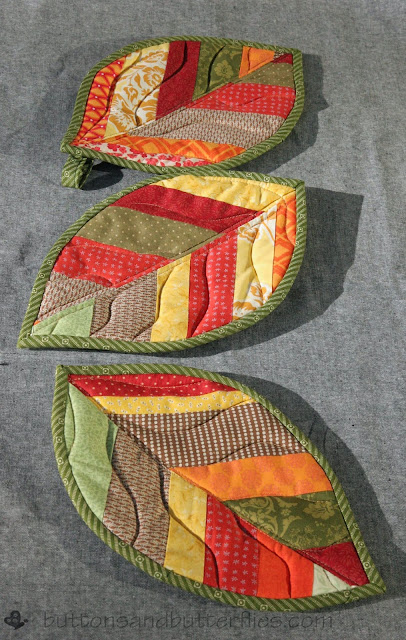 And I am not sure why because they are so fun and satisfying! 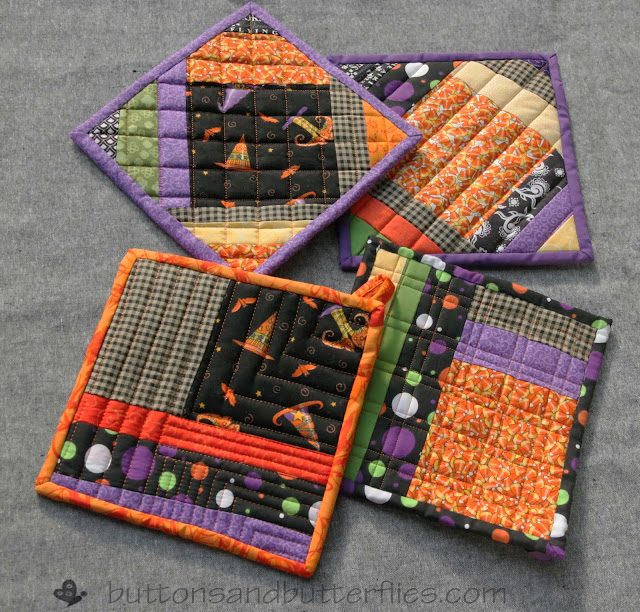 I had zero plan and no tutorial other than using some of the Insul-Bright material I bought over a year ago.  I decided to just piece some Halloween prints with other scraps first. 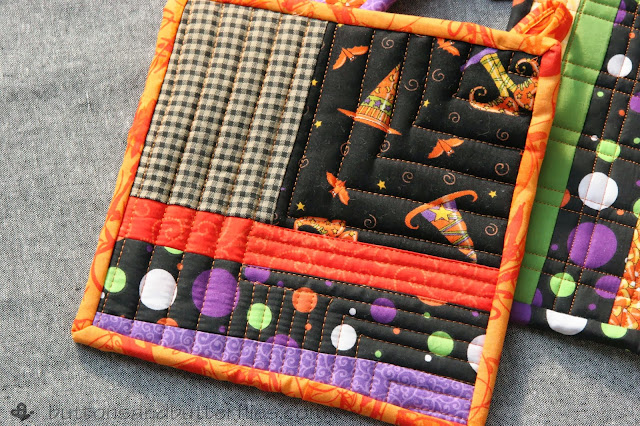 I layered one piece of Insul-bright and one layer of batting so they would be nice and thick. 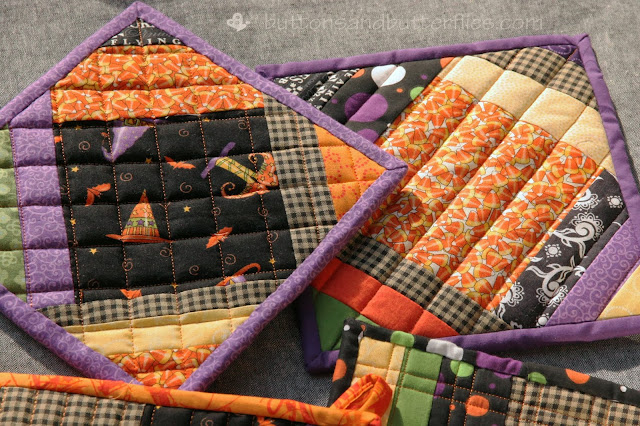 I used a modified Quilt-as-you-go method by piecing the pieces onto the batting as I went along, but I actually did not do the quilting until after I had the entire squares pieced. 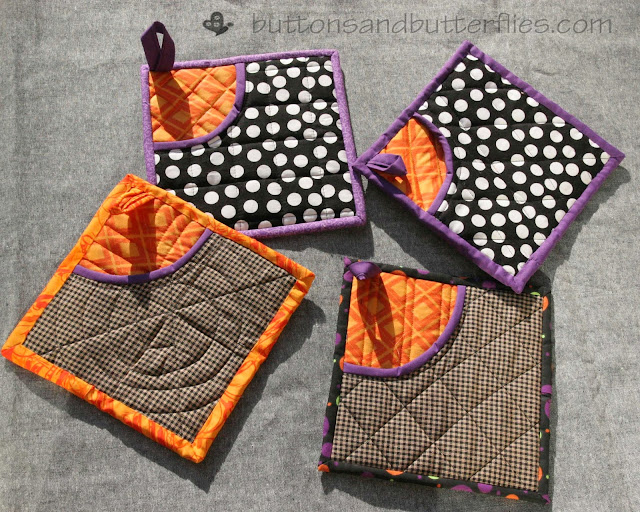 I used a different pattern for each potholder.  However, before I did the binding on each potholder, I decided that I needed to add loops and couldn't quite figure out how I wanted to do them.  So I went on a google hunt to see how others looked. I decided to just go with my original plan because I really didn't find any loop tutorial.  However, I did find the idea of making a pocket to put your hand in in at O'Frannson. 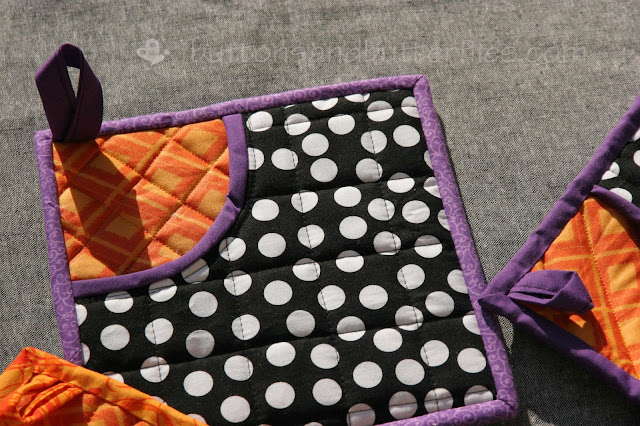 I thought it was brilliant, because a plain square was dangerous for this burn prone gal!!  I burn the back of my hands ALL the time!  It also gave me an opportunity to do a different quilting pattern on the back piece! 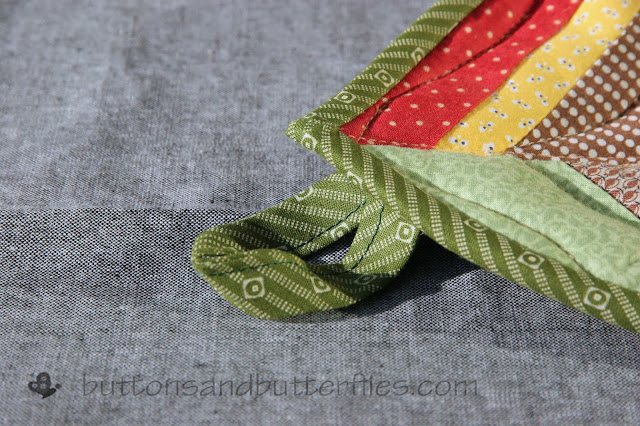 Enter in the leaf potholders.

Ironically, while I was on the hunt for a loop tutorial, I found an image of a leaf shaped potholder.  Hubby happened to walk into the room and stated that we needed "Fall" potholders when Halloween was over.  Please, honey, don't twist my arm! 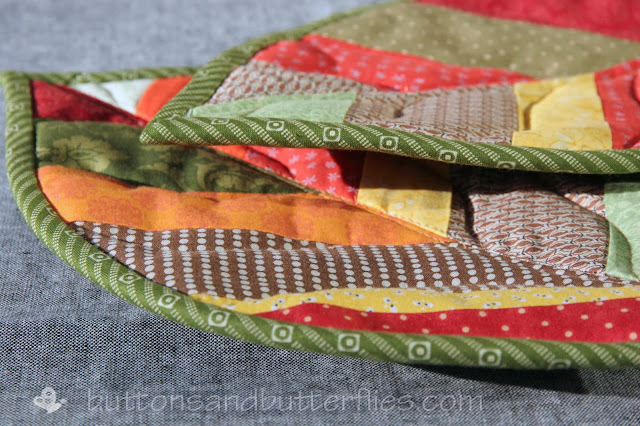 They were so fun to make!  My second confession?  It has been a while since I made bias binding (don't throw rocks at me).  I forgot how nicely biased binding wrapped around curves!

I stripped some scraps and cut them so they had the angle out. 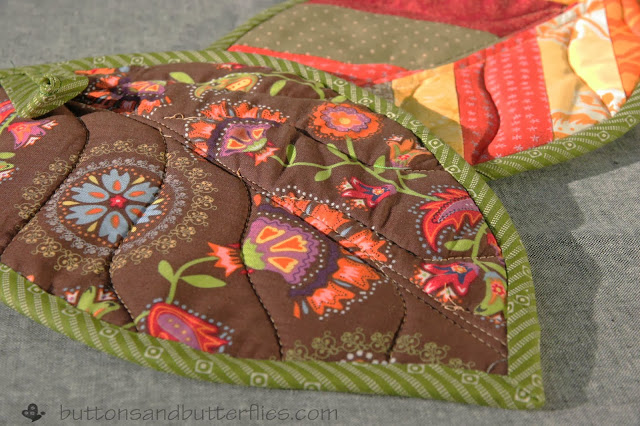 Quilted them with a swirly movement.  Straight would be fine, but I was having a bit of fun!

If you are in need of a pick-me-up on a grueling project?