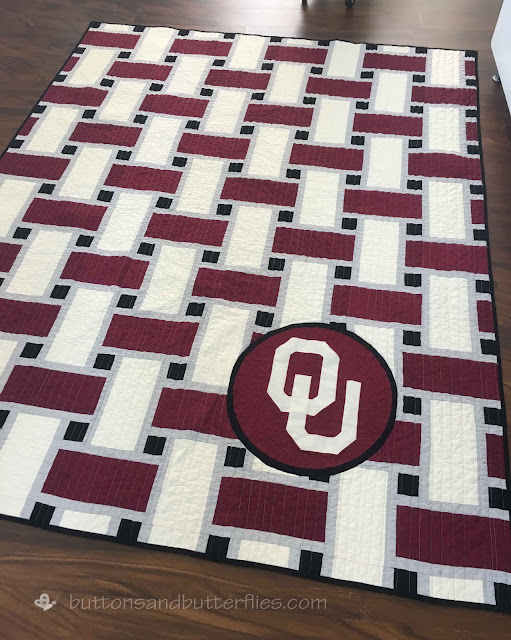 I wish I had the photo of the graduate that this quilt is going to!
He is a young man headed to the University of Oklahoma, Department of Aviation
this fall and is also already a REAL pilot.
(I know that is weird to say, but it just blows my mind that he was flying planes while in high school!)

When he was a little guy, his mom tucked him in with a quilt made by his grandmother.  He would say "airplanes UP!" to her every night. 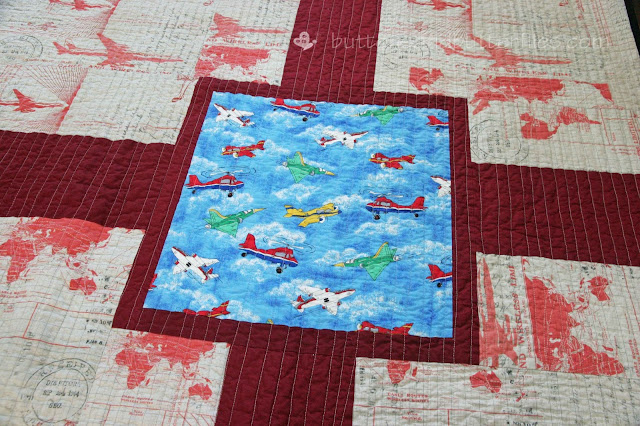 She requested I add a bit of that fabric to the back of the quilt headed with him this fall! 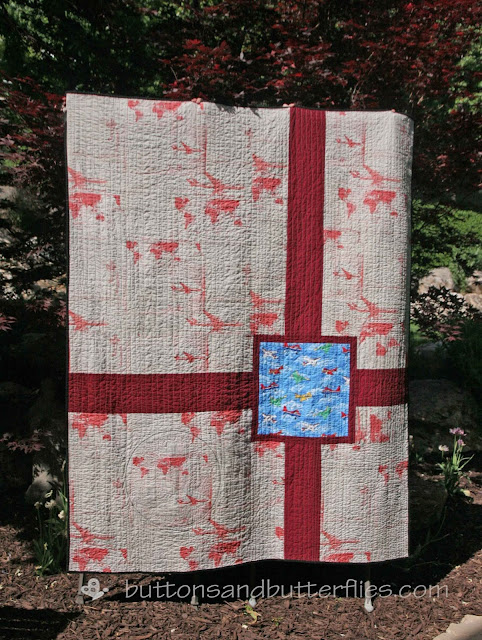 I can't tell you how excited I was to find this fabric for his backing.
It's called Jetsetter by Tim Holtz. 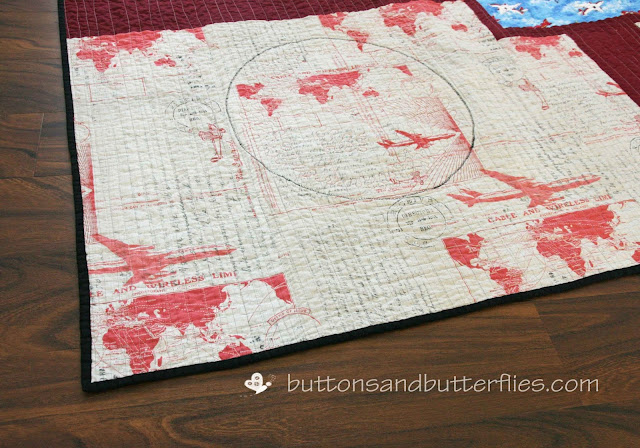 Unfortunately, I did run into a bit of trouble while piecing the backing.
When I had originally assessed and purchased the yardage, it appeared quite non-directional at first. 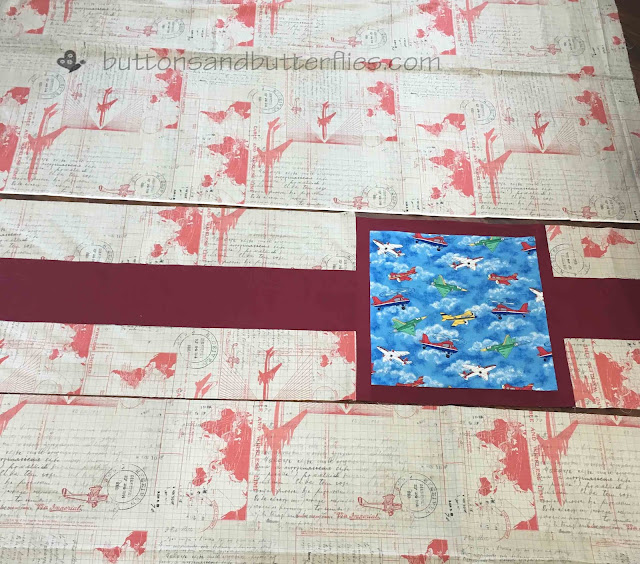 I had intended to have only a single stripe on the back, but when I realized all of the commercial planes appeared to be nose diving, I immediately messaged her to let her know I had to make a change in plans.  I think I said, and I quote, "There is NO way I am giving him any bad ju-ju" 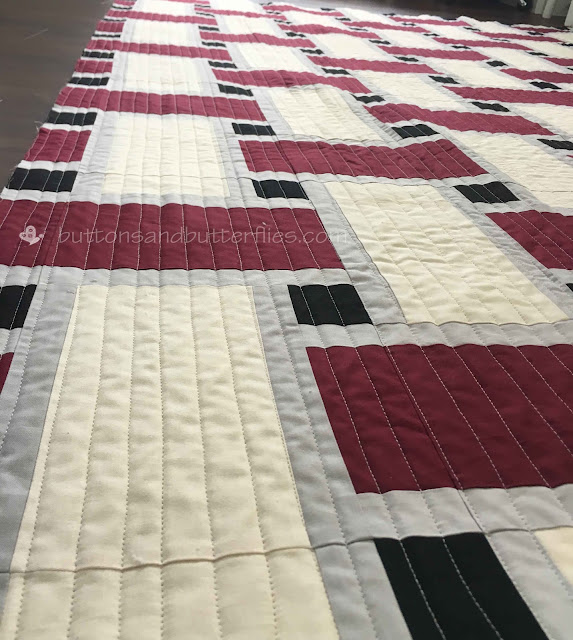 The last time I did this quilt for my own son, I did a square meandering, but this time I really wanted to do straight line quilting. 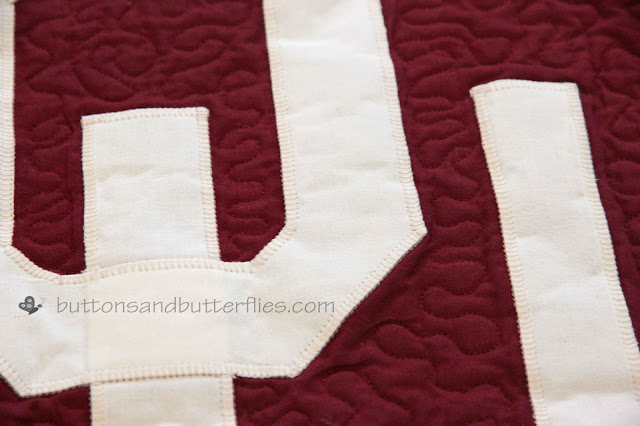 I did a meander around the logo so that the applique would pop, with its blanket stitching, from the background. 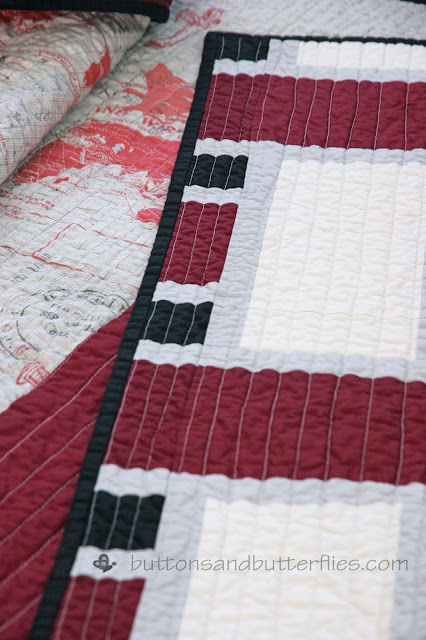 I went with the black binding to frame the entire quilt.
I will admit, I struggled to choose the coordinating fabrics.  OU has only two specific colors for their school, Crimson and Cream.  I was so glad the Ash gray and black didn't distract from their colors! 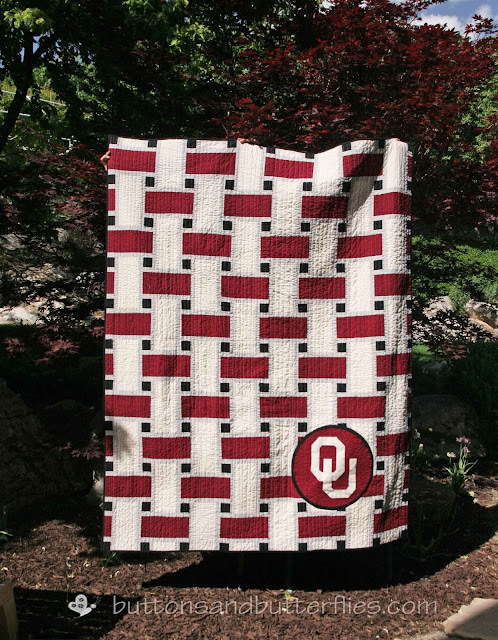 Today is his graduation and I can't wait to see his reaction to his gift!

"Be a pineapple.
Stand tall, wear a crown, and be sweet on the inside." 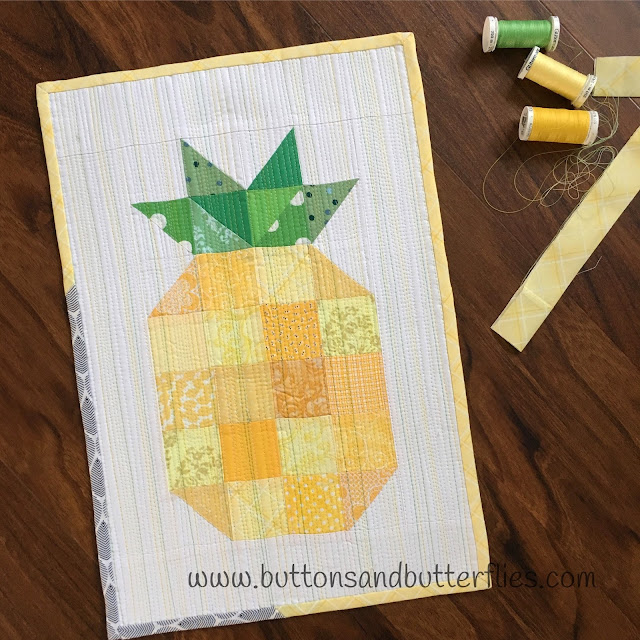 This year, the Salt Lake Modern Quilt Guild decided that they wanted to do a mini swap again.  Last year, I didn't have one and it was so fun to watch everyone open and then steal away minis from each other, white elephant style. 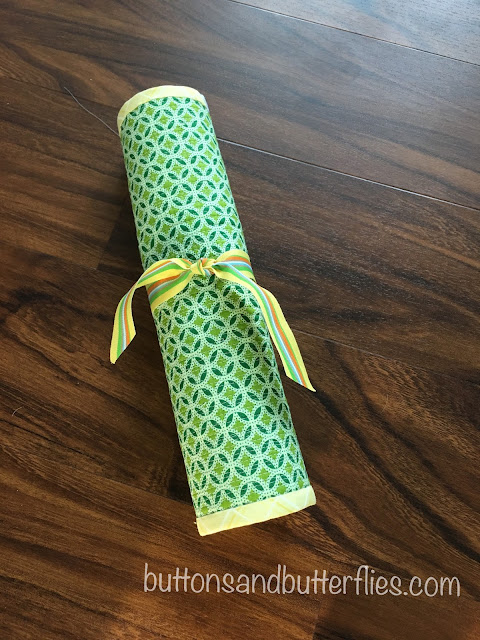 This year, I decided I wanted to do something fun like the pineapple quilts I have been seeing around lately. I confess, I saw just saw a block on line, quickly did some quilt math, and pieced the top with 2.5" inch unfinished squares and HSTs from fabric that I scrounged from my scrap bins. 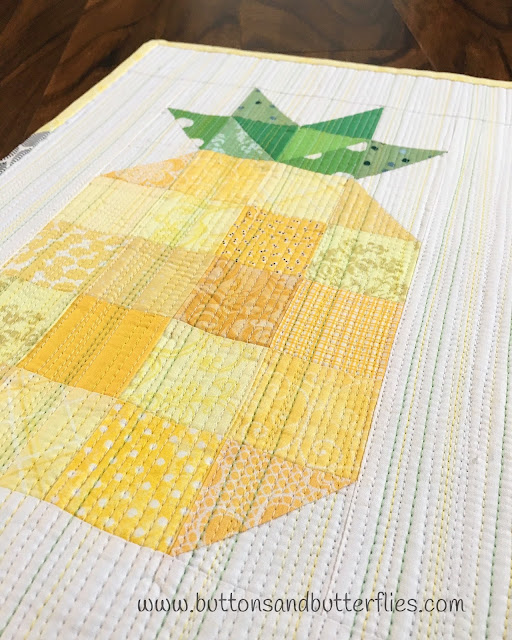 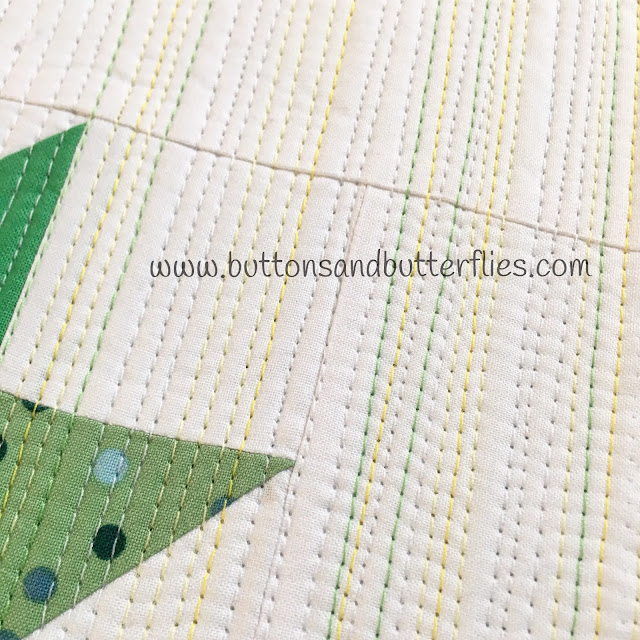 I had a lot of questions on Instagram when I posted the photo in progress.
I used four different colors, white, light yellow, dark yellow, and a green in 50wt Gutermann using varying widths and varying stitch lengths (generally 3.0-4.5).  I have had so many questions about it that I will be making a video very soon to share.  Stay tuned!!! 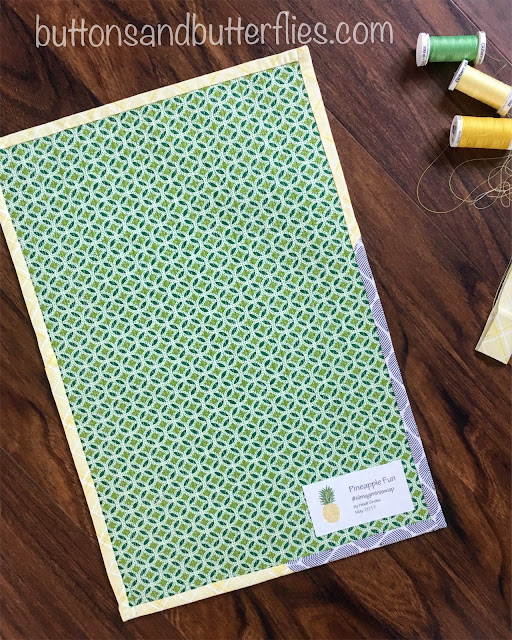 The backing was a fun green print I have had in my stash for quite awhile. 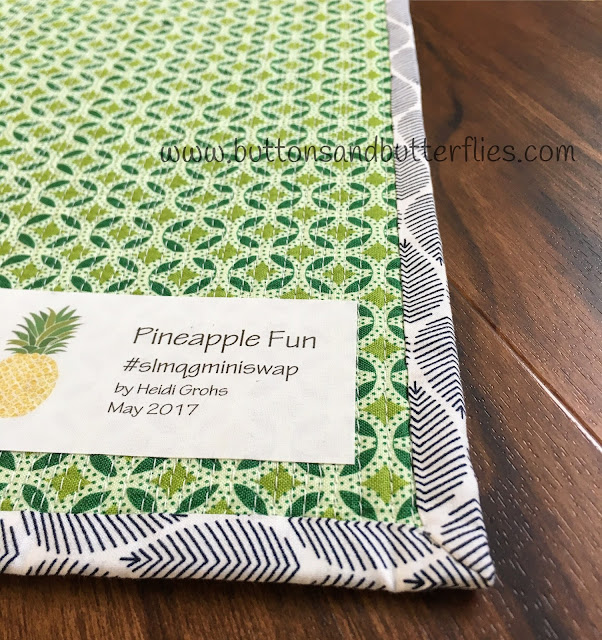 I had some fun with the binding and added a bit of black and white with the yellow to frame it. 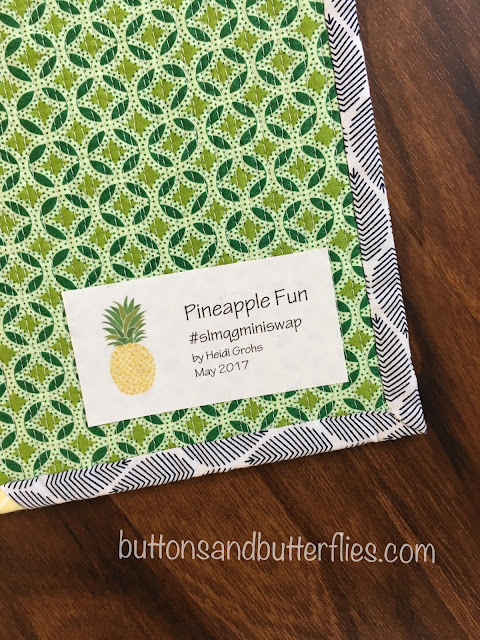 I added a printed computer label and then just used Heat n Bond to secure it to the back since it was a mini wall hanging. 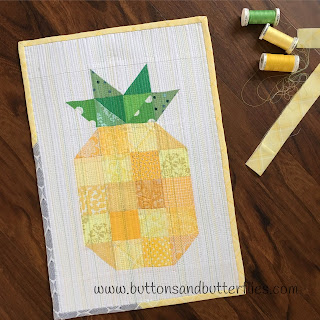 I had a great time and so glad to be able to participate this year.

Are you still quilting along with us at the Fat Quarter Shop Patchwork QAL? 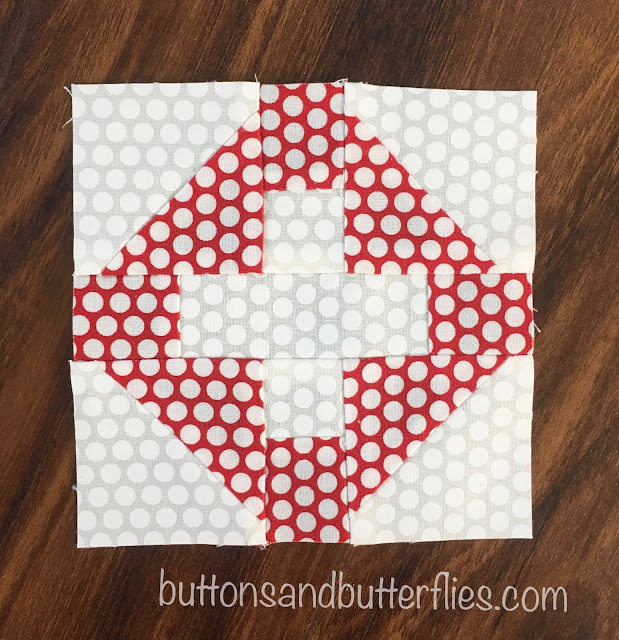 Another fun block with squares, rectangles and HSTs! 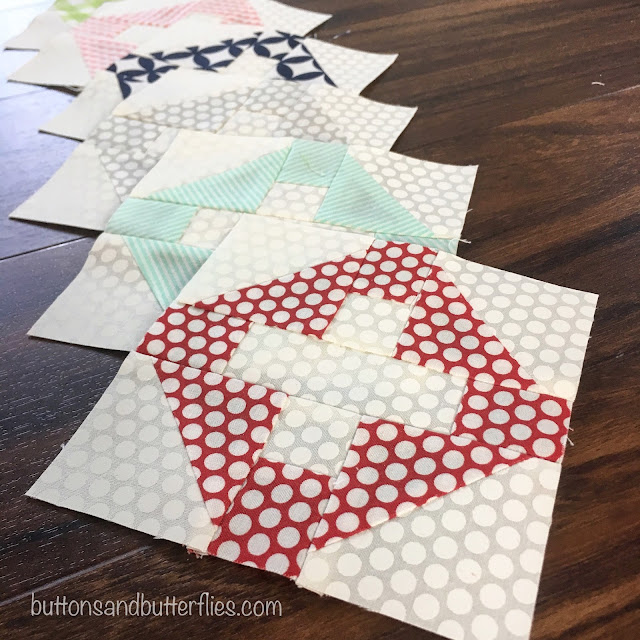 I think I will make a larger block version with some of my scraps in the future! 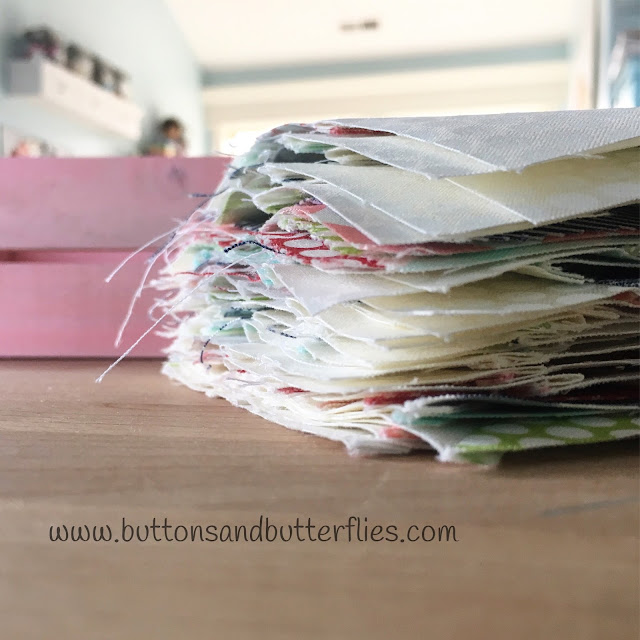 If you haven't started it, it isn't' too late.
Block One: Souvenir of Friendship
Block Two: Diamond Pane
Block Three: Box-in-a-box
Block Four: Star and Cross

These blocks come together very quickly!  See everyone else's!!!!

The designers of the quilt's fabrics - Bonnie & Camille - are sewing along, too! Fun!
Amanda from Jedi Craft Girl (@jedicraftgirl)
Amy of Diary of a Quilter (@diaryofaquilter)
Andy of A Bright Corner (@abrightcorner)