"A gentleman carries a handkerchief, not for himself, but in case a lady needs one." 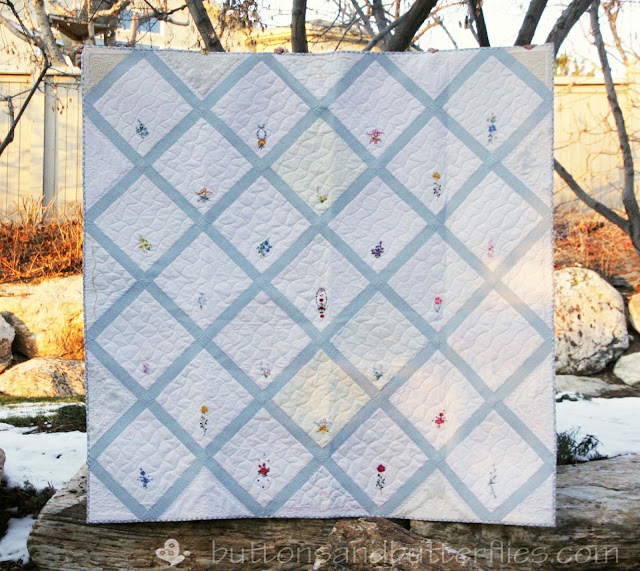 A box filled with 33 handkerchiefs and an unfinished quilt top arrived on my doorstop the summer of 2016 from a previous client's mother.  The letter that accompanied it, explained that they were gifts from her grandson. Her daughter-in-law gave them to her from her grandson over the years.  The family custom is that they were to be made into a quilt for his bride-to-be.  The grandson had finally found the young lady who he thought qualified for the title.  Over the years, she thought she would eventually learn to quilt, however, at the time, she was 79 and said she knew it just wouldn't happen. 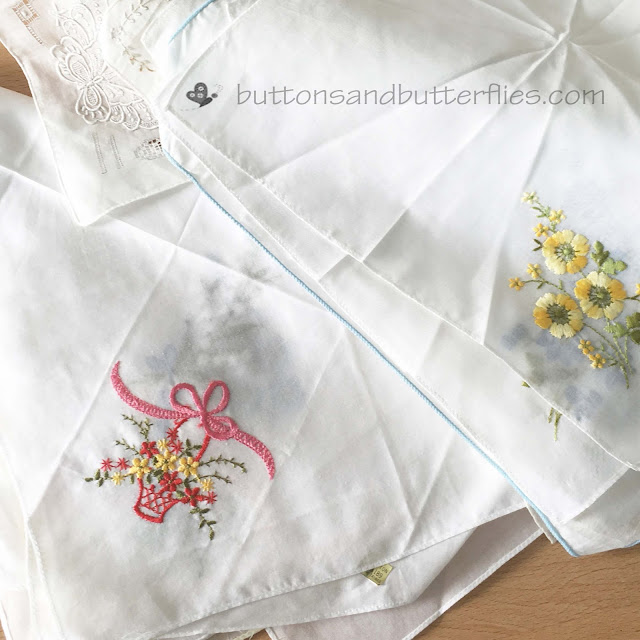 The first challenge was to choose fabrics.  She had sent me a book she had bought and I gathered from it that she wanted me to stick to a traditional layout.  That meant sashing was needed.  I offered a few choices even though I really wanted her to pick a beautiful natural linen.  She really wanted this icy blue called Kona Cloud.  You always do what will make the clients happy! 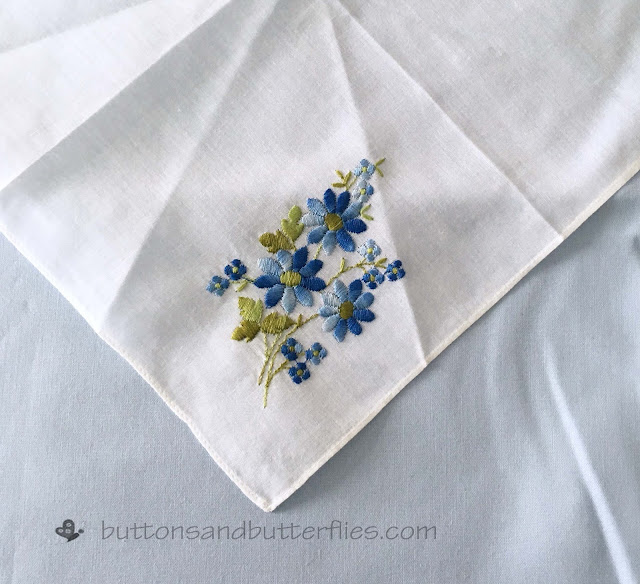 As I was about to work on it before Christmas, when I had it scheduled, she emailed me and let me know that the engagement was sadly called off and that there wasn't a rush. She told me to take my time.  One of the WORST things you can say to me!!  I had a bunch of other obligations and I had wanted to make some family gifts, so I postponed it for the New Year. 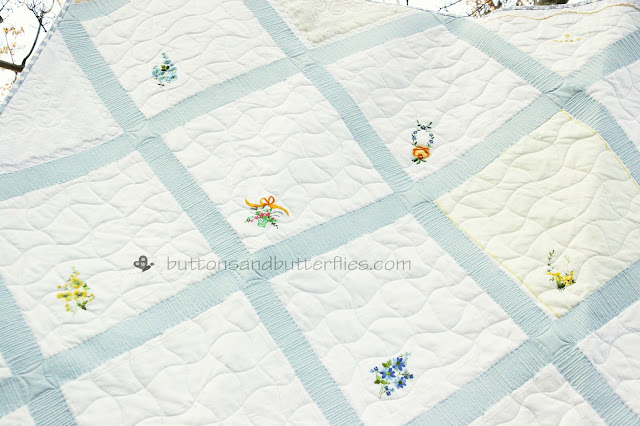 I blinked and my new year rapidly filled and since there didn't seem to be a rush to have it since there wasn't an engagement, I took my sweet old time, here and there. Maybe too long.  I will say the appliqueing process was a bit tedious.  Since all of the handkerchiefs were different sizes, I decided to make a consistent block size and use a Kona White fabric foundation for each block. 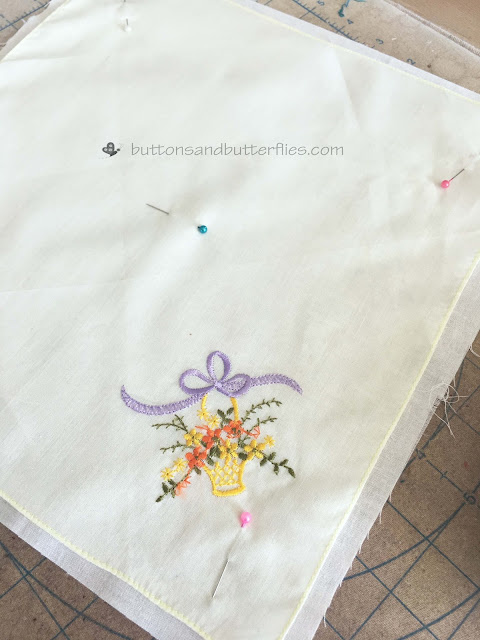 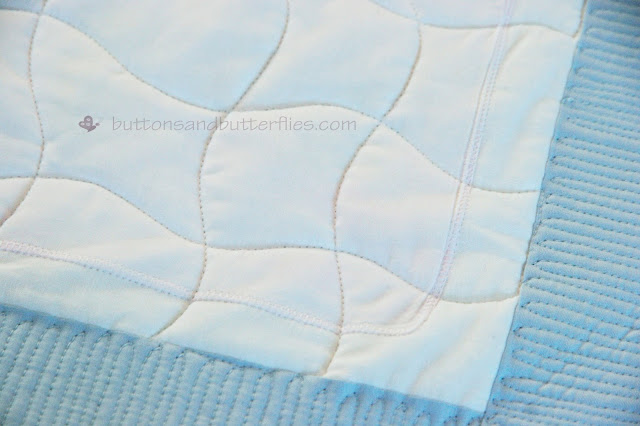 I will admit.  I reqlly didn’t feel ansense of urgency since she kept assuring me there wasn't a rush.
I also was very indecisive about the layout of the blocks.  There were an odd number of handkerchiefs and two were actually rectangles.  After a few days, I had an "aha" moment" and decided instead of using plain white fabric side set triangles and corners, I would use the handkerchiefs! I took two of the smaller lace-only handkerchiefs and cut them in half. And used four others cut in half for the side set triangles. 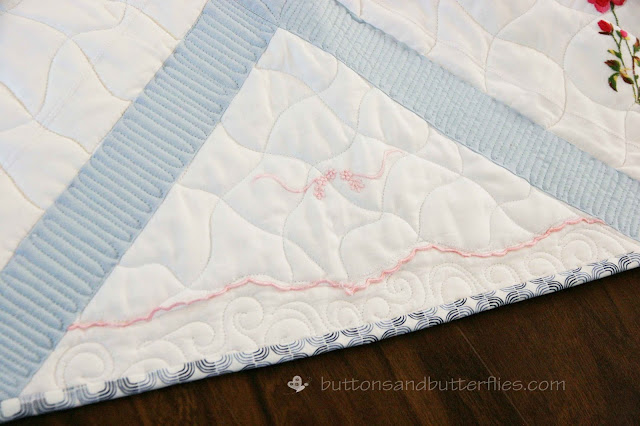 I ended up deconstructing the rectangle handkerchiefs and folded them in a special way to make triangles.  If you look super close you can see a seam where I hand stitched the edges together to make the pretty rolled edge. 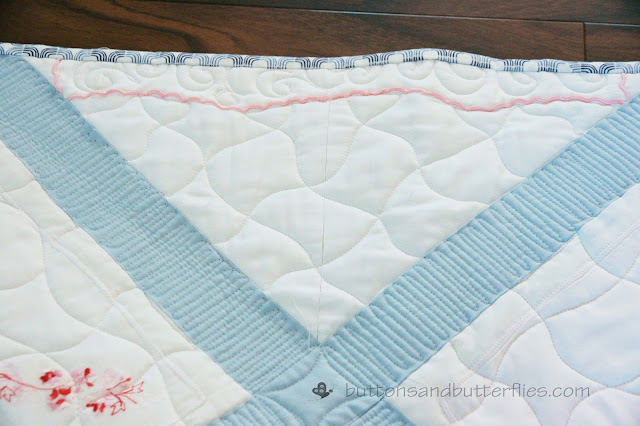 You can hardly see the seams after I quilted it! 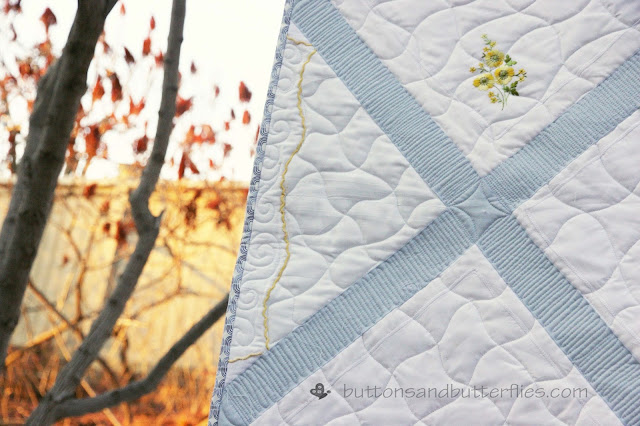 After I finished all the applique, I had my layout and sashing put together.  Summer hit and I put it aside for some family issues and traveling I had to do. When the boys got back to school, I pulled it out to get ready to shop for some backing and decide on my quilting plan.

Hurricane Harvey hit.  Her daughter announced on Facebook that her mother's home, my client's, had been flooded.  I messaged to her that I still had the finished quilt (I had been planning to send it the next week) and the handkerchief quilt was still in progress. I would wait to hear where they settled before I sent both.  I thanked the lord that I hadn't sent the first to be lost forever!

At the end of October, my client emailed me her new address for her apartment and the fact that her grandson was re-engaged with the same young lady.  She needed the quilt! I sent her the finished quilt and told her I was going to speed up work on the handkerchief quilt!

When I received her thank you for the scrappy quilt I about cried!  That was the only thing she had left of all the projects she had made her children and grandchildren through the years.  That one sweet scrappy quilt!!!
I was so excited to find the backing and make a quilting plan! 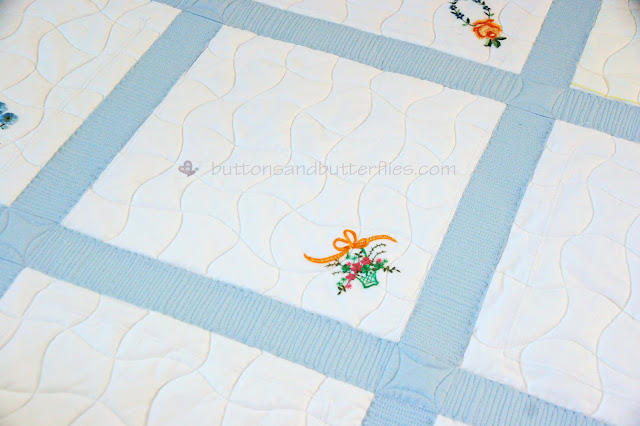 I chose an organic crosshatch for the handkerchiefs so it didn't overwhelm the tiny flowers.
On the corners with the lace edged corners and side set triangles,
Ole Betsy the longarm insisted on a few swirls. 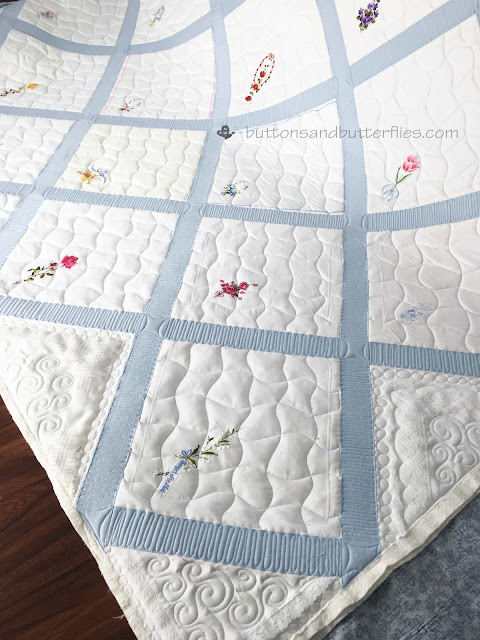 The binding was a happy marriage of the white handkerchiefs, lighter blue sashing, and the darker backing from Kate Spain's Aria line. 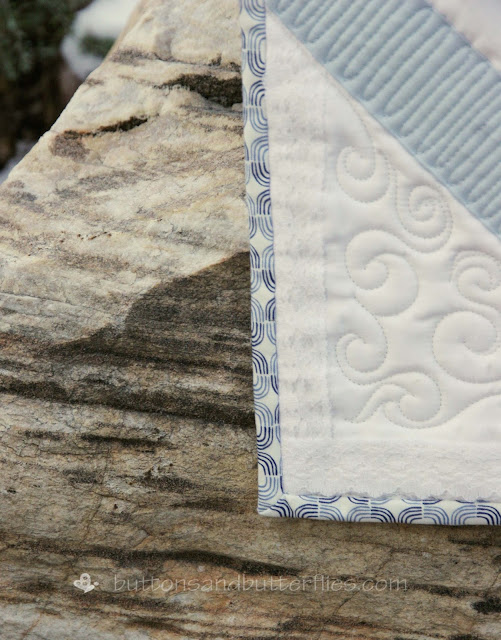 The client really wanted her grandson's favorite color, navy blue as a backing.
I chose a very subtle tone-on-tone feathery navy fabric so it didn't argue with such a floral and delicate front. 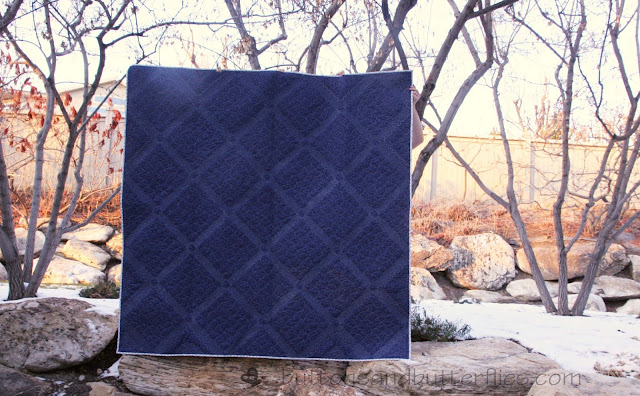 I loved how the quilting made a great design on the back! 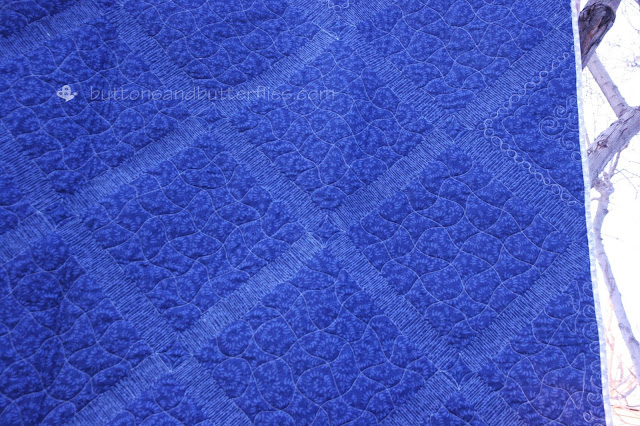 I sent it right after Thanksgiving, just in time for the holidays.  The thank you note I received from her was absolutely lovely, made me cry again, and was worth every bit of work I put into it.  If you are wondering, I could NOT bear to charge her for my work on either quilt.  My husband and I both agreed that it would be our personal donation to a sweet family that lost everything during Hurricane Harvey.

It ended up being a glorious labor of love.