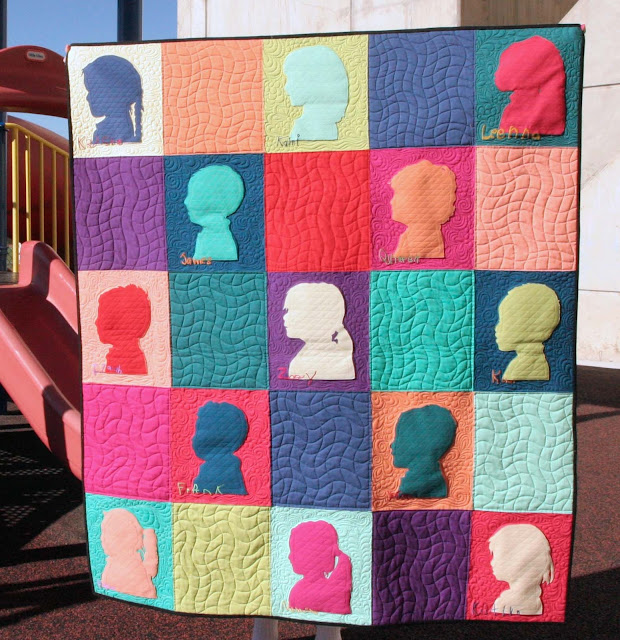 This was the first time I have had complete artistic control from start to finish on a school auction quilt and I could not have been happier! 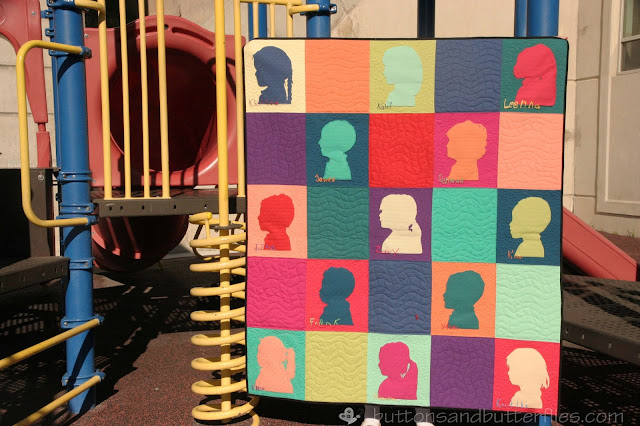 I saw Angela Pingel's Profile quilt tutorial on her blog, Cut to Pieces, and knew that I had to make it for Button's Kindergarten year! 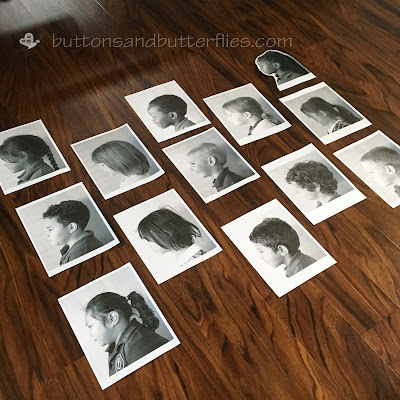 Her instructions on taking the pictures were perfect.  The only thing I made the mistake of was focusing in on some of the kids, when you should, ideally, stand at the same spot and make sure your camera lens is the same distance each time. 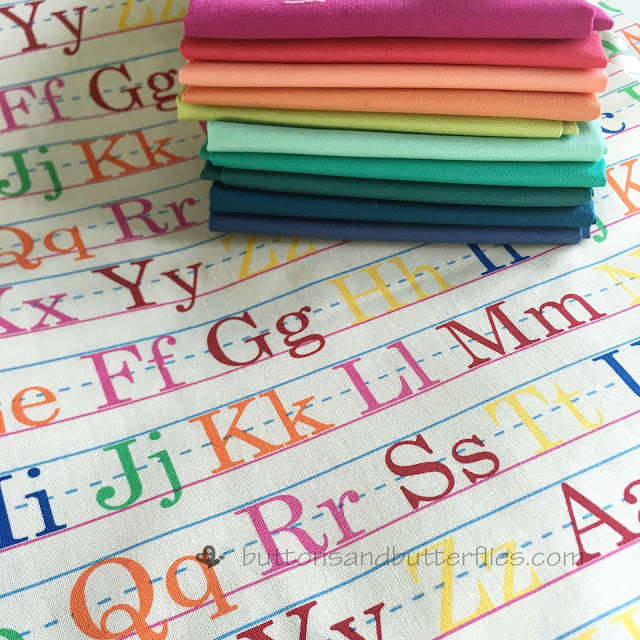 I had this great stack of solids I had picked up at Quiltcon in Austin and had used some of it for a quilt I'm working on for Button....just enough to do a quilt for 13 students. I found larger scale Alphabet fabric that I've used before from Joann's for the backing. 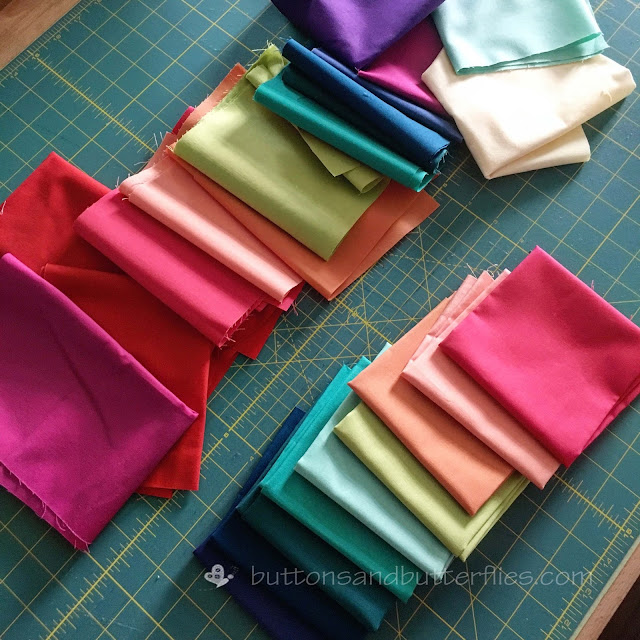 I struggled to figure out a layout and decided to just do some empty blocks to make it a nice lap size. 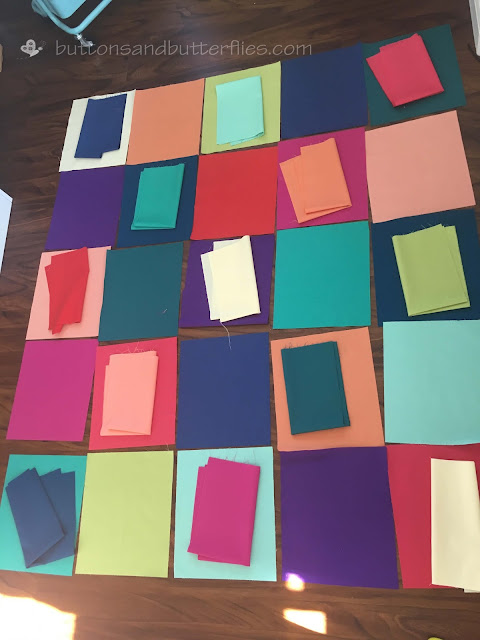 I liked the idea of printing on fusible, but I already had a bolt of Pellon Wonder Under in my studio.
I also really wanted my profiles to face the original direction, so I used a sharpie around the printouts, then flipped them over on my light box and made a line on the back.  Then I laid my fusible (sticky side down) on top and traced.  I cut up close to the edge, then ironed on, and then cut the fabric with fusible out. 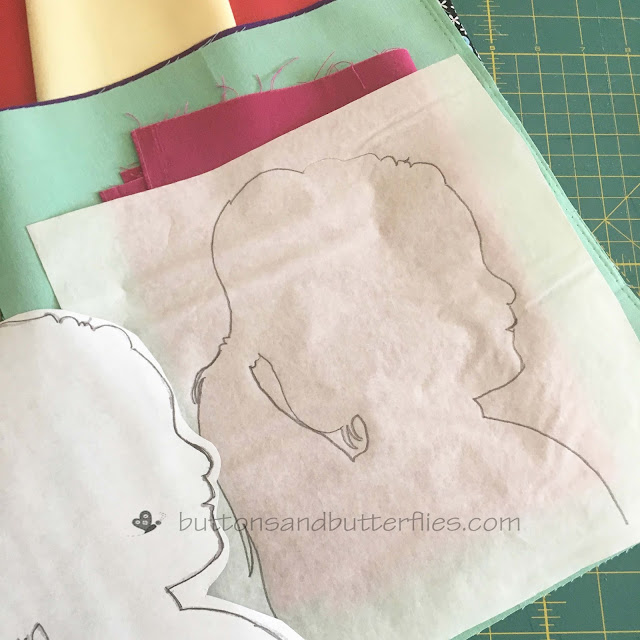 My longarm ruler base was cracked in the move, so I didn't feel confident I could get the crosshatch that Angela's quilt had.  So I fused and stitched my applique and then quilted with it with a piece of scrap batting on my domestic machine. 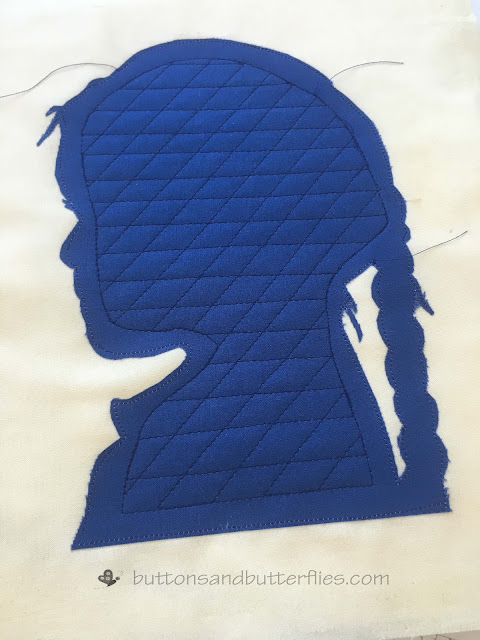 I then cut away just to the edge so that it would help the trapunto effect I was going for with this quilt. 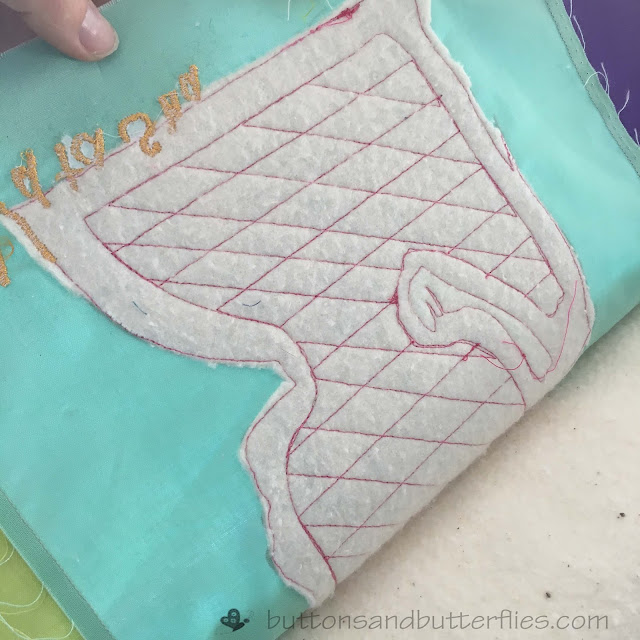 Before I pieced the blocks, I added their embroidered names.  I went in to the classroom and had each child write their name in the same size space.  I scanned and digitized them in my embroidery software so that they could be stitched out their EXACT penmanship. Here is my confession part.  I told myself that a neutral thread throughout would work.
I didn't want to change threads constantly.

And it looked alright-ish until I got to the end of the first row in the dark fabrics..... 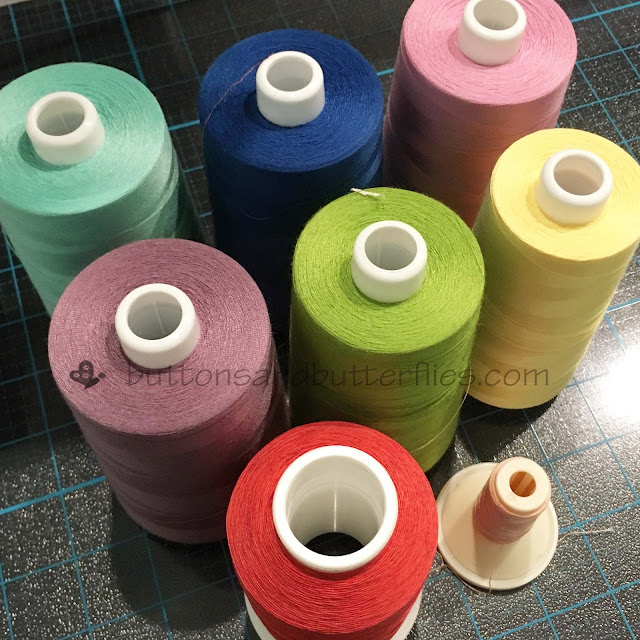 I have not been listening to my gut the past few weeks and have paid heavily for it.
I spent six hours unpicking and reminded myself that sometimes there is a reason we should do the extra work. 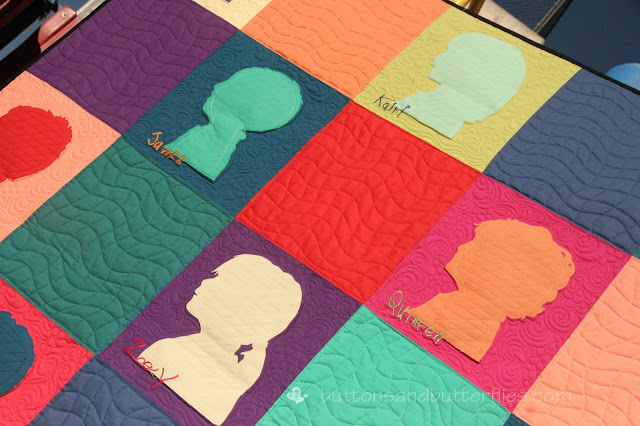 This was the second time I used double batting on a quilt and I LOVE IT!!!
I chose a wavy crosshatch quilting on the empty blocks to make sure the eye always returned to the profile blocks.  They were fun and will definitely do it again! 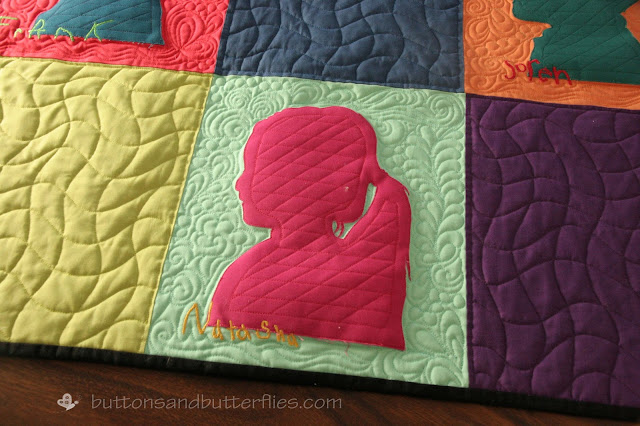 I decided to quilt the profile blocks with free motion "doodling" and making sure I did an outline around the profile to emphasize the trapunto effect I was going for. I think it worked well. 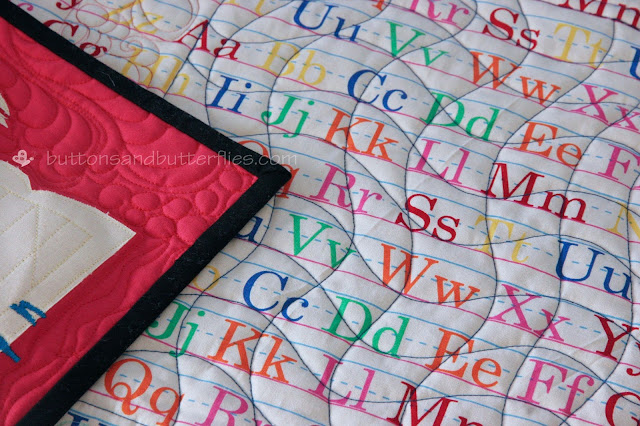 See all the fun colors on the back?!?!  I was too hesitant to tempt fate and use a neutral color.  I'm thankful the backing was busy enough to handle it.


Had to share Button's little profile!  Unfortunately, I did not have a matching thread color for his fabric choice.  I'm not totally in love.  But his little handwriting!!  I melt.... 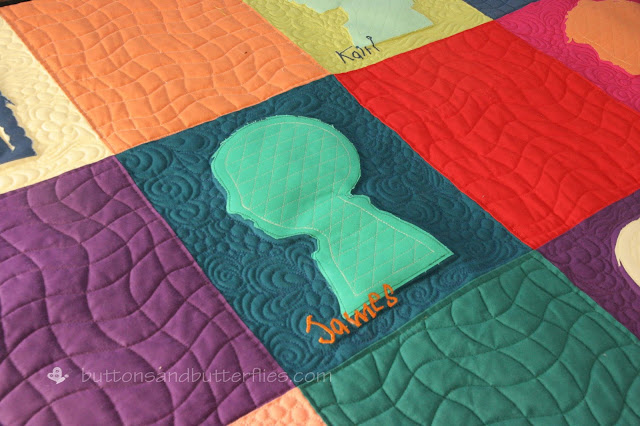 I tried to match the letter backing, but soon discovered the lines just weren't matching.  So I added three primary colored strips.  I like how it draws the eye to the label though. 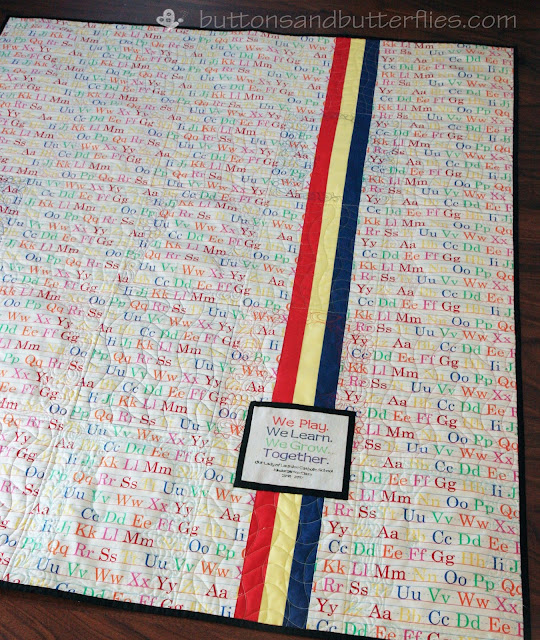 A solid black binding seemed the best choice to frame out the all solid quilt. 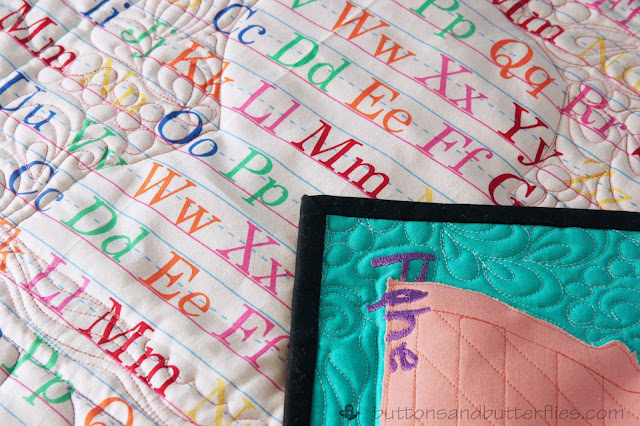 And, of course, I had to embroider a label for the back! 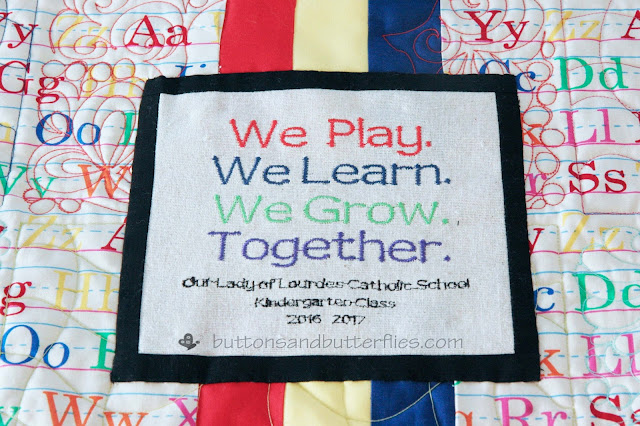 The thing I love the most is all the texture!!! 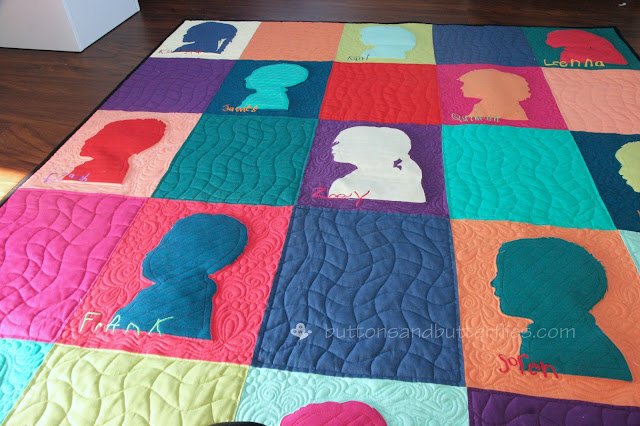 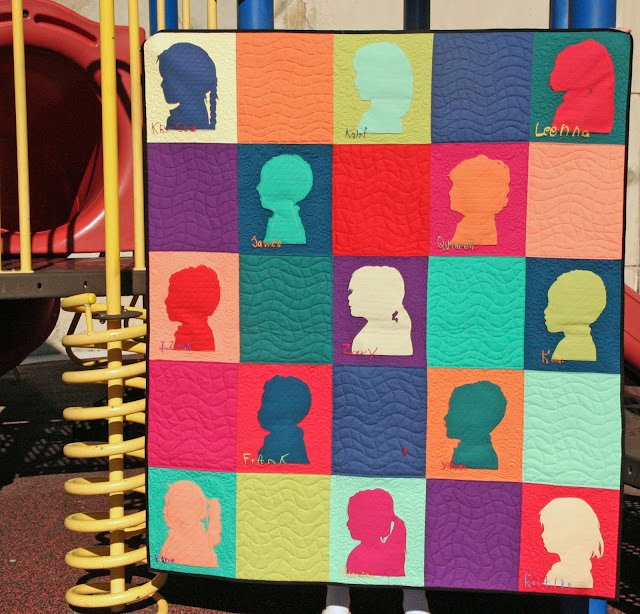 And off it went to Auction....
and was successfully sold for a VERY generous amount to my co-room mom!
I couldn't think of a better Mom-Son duo to win it!!!