Have you ever seen Bill Cosby's show Himself?


Here is my favorite quote from that show:

"My wife and I have five children and the reason we have five children is we do not want six. And those we have we want to get out of the house, before we die. Just to get them out. Because all children have brain damage. Now those of you who have no children let me describe the brain damage. You come in the room with a Coca Cola, you set it down you go to get a news paper. Child comes walking in grabs the drink. You say Gimme that! Didn't I just tell you not to drink it? The child says "Uhh Huh". You say What did I just say? "You said but for not to not you drink." So every time I tell you that don't I I say every time I have a drink don't you drink it, don't I say that? "Uhh Huh". Now tell me what I said. "You said but for not to not you drink." That's right. So you put it down to go and get the paper the child picks it up again and quickly starts to drink it. You say Gimme that! Didn't I just tell you to ahhhhh... Well why did you do it? "I don't know". Well that's brain damage. And that's what parents have to deal with all day. That's all you see, I don't know, I don't know, I don't know. My parents never smiled because I had brain damage. My wife and I don't smile because our children are loaded with it. Ohh my parents smile now, when ever they come over to my house. When they see how much trouble I'm having. Ohh they have a ball. "Having a little trouble eh son?"

Bill Cosby, 1983
So here is MY brain damaged story!
Remember these jewelry bezels here?
I was so excited Friday morning because I was delivering them to our school for the Auction Preview day.  I love when I get a project done and can let all my stresses go.
As I laid out the bezels on the table to display, I realized I was missing EIGHT bezels.
Not one, but EIGHT!
I panicked.  I was about to throw up.  My girlfriend tried to calm me and told me to go home and look.
I arrived home. They were NOWHERE!  I worried because I have been doing spring cleaning and thought maybe it was tossed out by accident.  As I sat down, I was ready to cry.
I finally gave up, and all of a sudden it hit me.  I took EIGHT bezels to Hobby Lobby to choose the ribbon I had tied to them.  Where were they?

In my diaper bag THE WHOLE TIME.


So disaster averted and off to the school I went.


Until I got there and was ready to get out of the car.  I couldn't find the bezels.  I searched the car.  NO luck.
Banging of the head on the steering wheel commenced.

I must have left them in my studio. 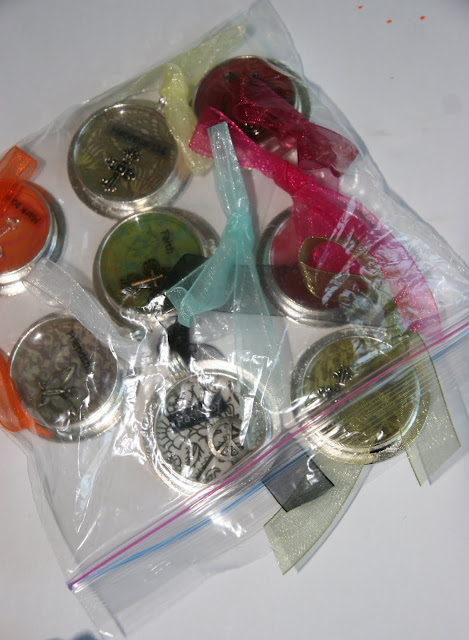 So I trucked myself home again. When I walked into the studio....


I searched high and low.  Where were they?  In my diaper bag.

And they were in my diaper bag the whole time.

I am definitely BRAIN DAMAGED.


All tongue in cheek...I would never make fun of someone who actually was!
Posted by Heidi Grohs