Is there ever a project that you feel completely satisfied with?

It is very rare for me, but this one I can honestly say has me thrilled! 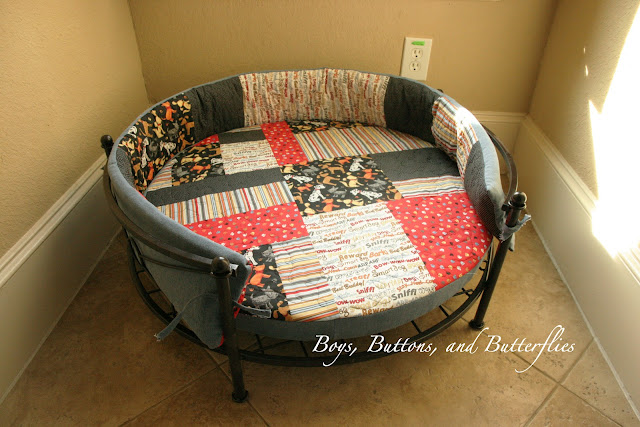 I covered my dog's bed with a quilted, very washable cover!


But first, I promised some friends...the location of said dog bed?  Why in our in our dog room, of course!

What is a dog room?

It is a small room off our laundry room. 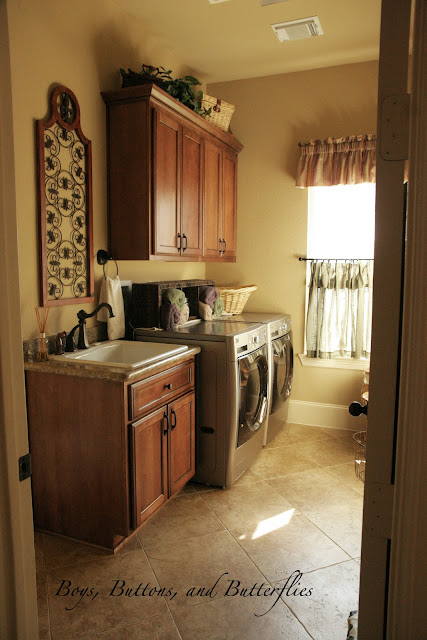 We had the builder bump out a small room into the garage so our precious little family members could have a special place.  They actually love it so much that we just have to say "bedtime" and they run to their room.  And I took this picture of them just waking up...at around 11 am.  They seriously love it in there! 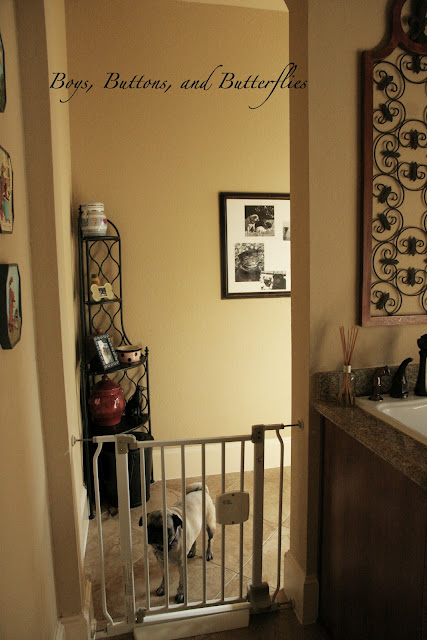 This is the BEFORE look of the bed. 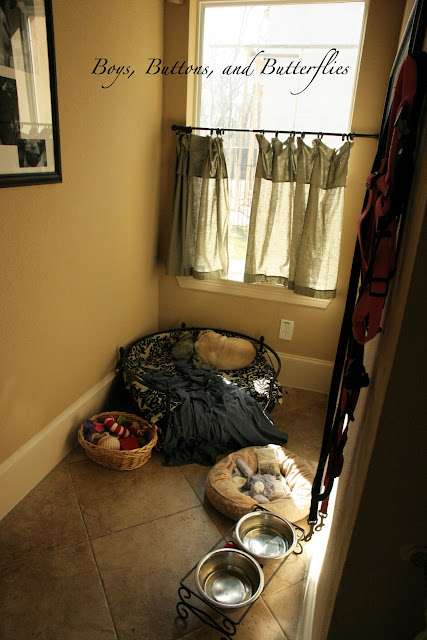 A rather nice black on off white pattern, but not washable whatsoever!

I have had a bundle of fat quarters that I picked up from Hobby Lobby.  I actually planned to use them for something else.

But Sunday, we realized that the blue sheet that I had tucked in on the bed until I could decide on a proper cover for them, was just not cutting it.

So I came up with a plan. 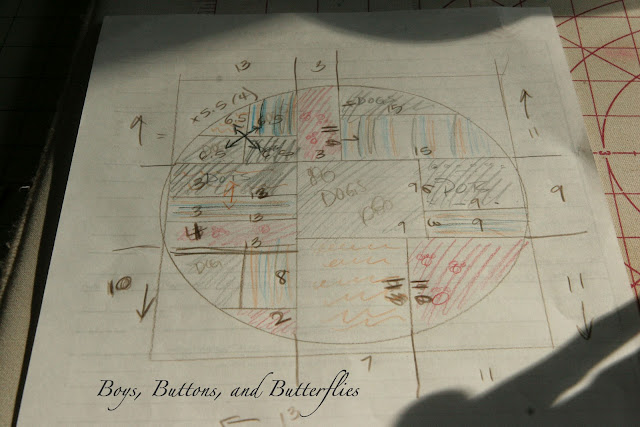 Cut my fabrics and laid them out on the foam circle.  I had no particular rhyme or reason of the patch sizes.  I just knew that I wanted to have it look non-uniform! 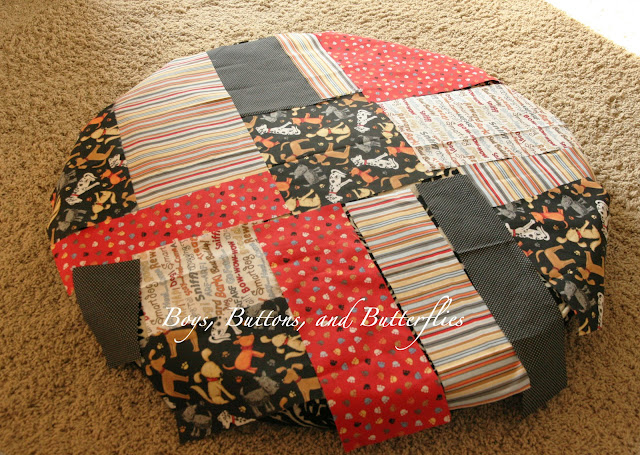 I was pretty pleased that my drawings were panning out and went ahead and pieced it.

Button played with his new Fisher Price toys as I laid out the square.  I don't have pictures because he kept climbing on top of me when I was sketching out the circle.  I broke any and all quilting rules and used a sharpie as I laid the foam circle on top of my square. 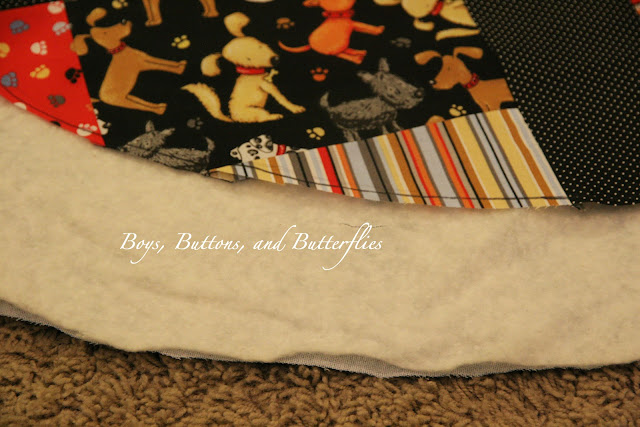 I was excited when I remembered that I had some denim fabric from the boys duvets old bedroom decoration. 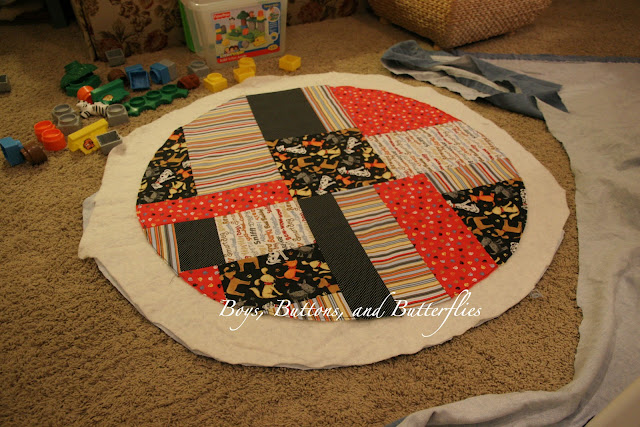 I sprayed the layers with basting spray and went back to my Symphony. 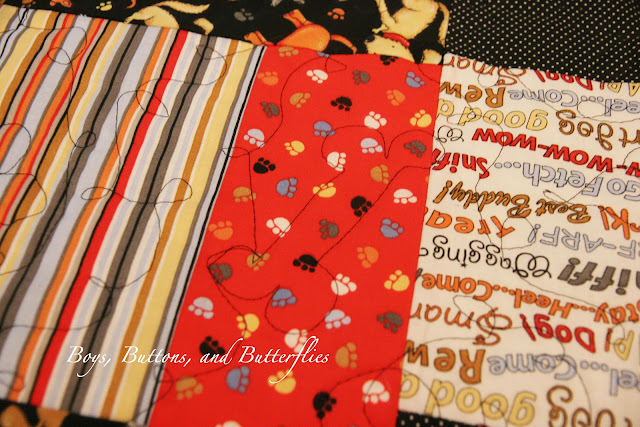 I decided to do loops again. It was a little rough going since I felt strange working in a circle instead of a linear rectangle or square!  It sounds strange, but I kept getting lost!  Ever so often, I doodled a dog bone or a paw-print. 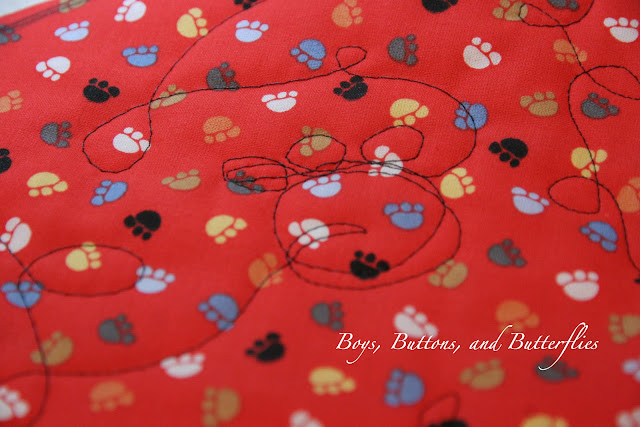 When it was all quilted, I took the top to the cutting table and trimmed. 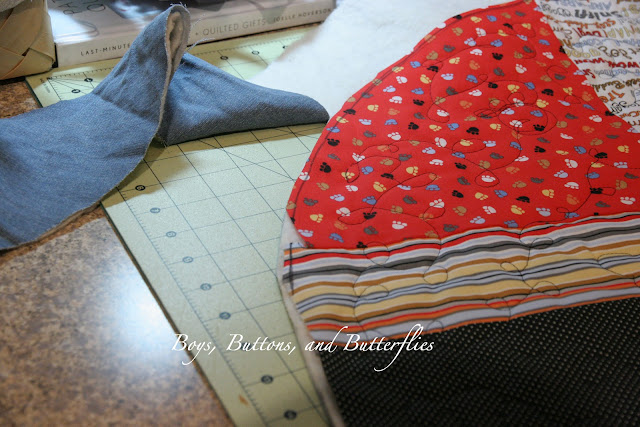 I grabbed some more of that old duvet denim to make the sides.  This was the moment I had an epiphany of sorts and am REALLY excited to share with you.  I was dreading this moment at first.  I had originally planned to make sides and then either a zippered bottom, buttoned bottom, or just a pocket bottom.

But then I thought I would extend the sides an extra 5 inches for a total of 7 inches. 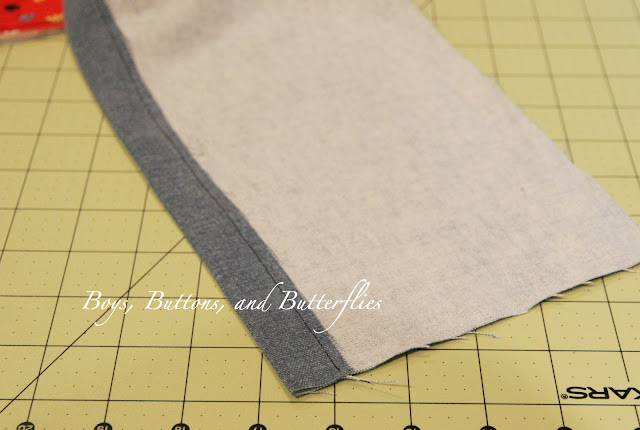 I folded one side to make a channel about .5 inch wide. 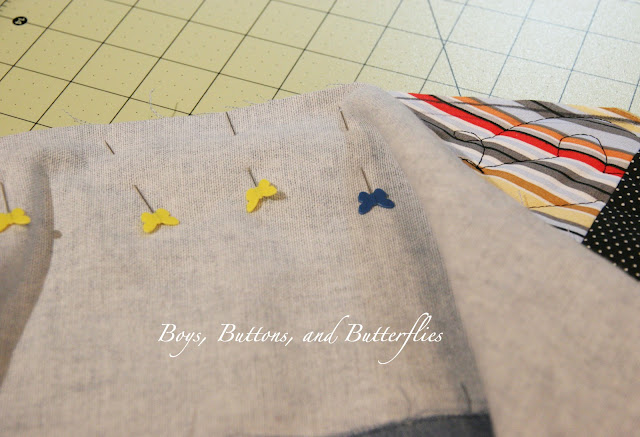 Pinned the strip the circumference of my 31 inch diameter circle and stitched a 1/4 inch seam, right sides together. 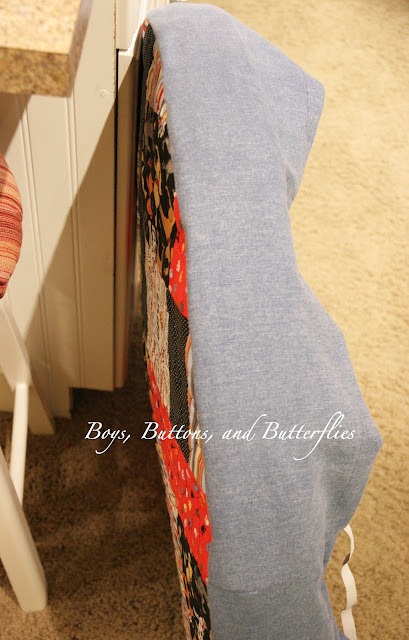 I placed the foam circle inside making sure I had it nice and snug. 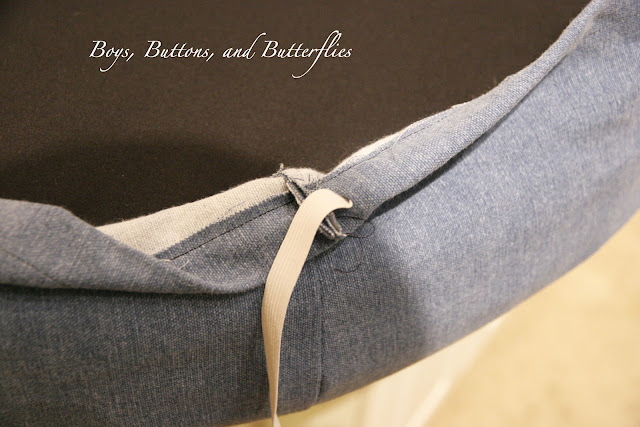 And ran .5 inch wide elastic in the channel to make a gathered fitted cover!  Like a fitted sheet, I can take this cover off and throw it in the wash with ease! 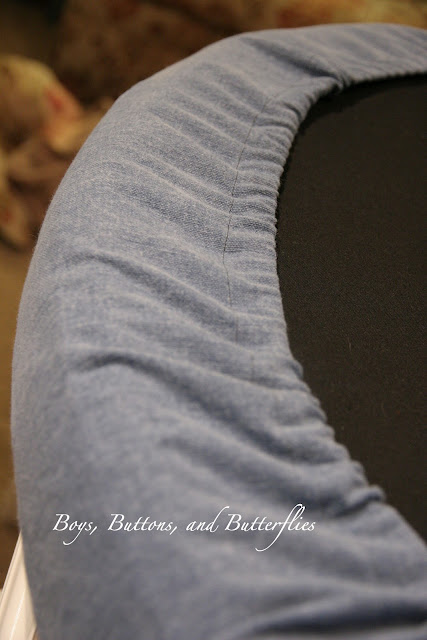 After that, I covered the bumper piece very much the way you make a bumper for a crib!  I decided to piece some remaining pieces that were all the same height of  7 inches.  I treated the bumper the same way as the cushion and used batting to quilt the patchwork side. 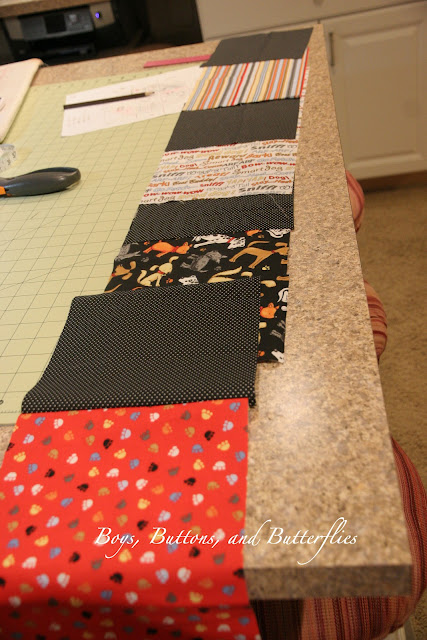 I then grabbed some more of that denim duvet (I LOVE it when I utilize scraps!!) and cut a long strip the same length of the pieced portion.  I also added 9 inch ties to the denim side before seaming together like a long tube.  Then I stuffed the bumper in there!  I did hand sew the end closed with a ladder stitch.  I did not make it removable because the bumper can fit in the washer well...the foam circle cannot! 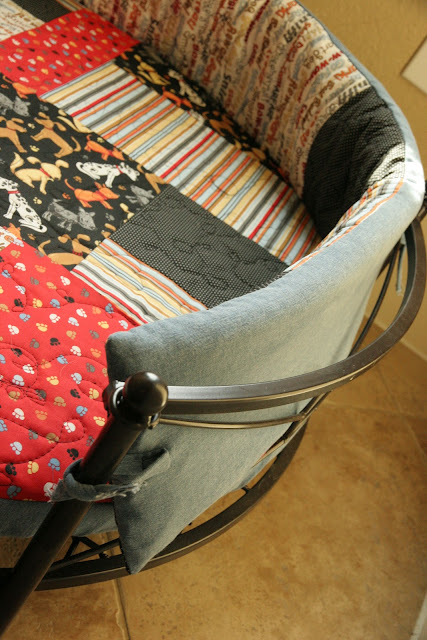 I wish I had taken pictures of the process...but I was at that point in a project where I was getting eager to get the project finished and it was getting close to their bedtime!

I am so pleased how well it turned out!  I really wanted to use this fabric for such a long time, and this seemed to be the perfect use! 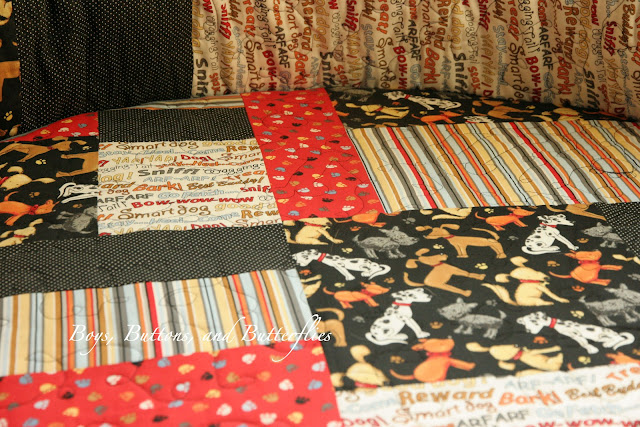 And, again, I apologize, but I am so excited about the elastic! I just think it could be useful to anyone who wants to make a simple dog cushion.  This technique would even work on a rectangle/square foam bed too! 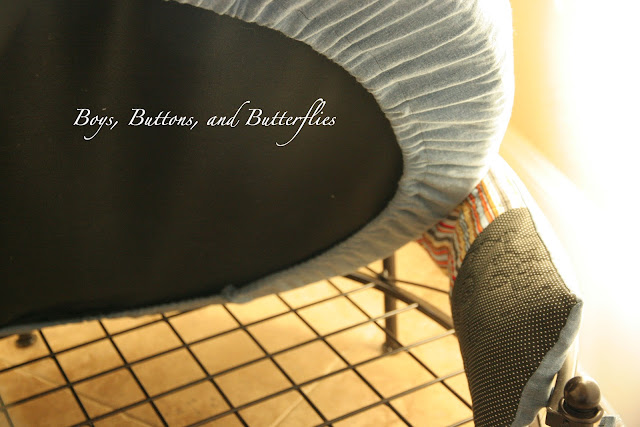 Now I have to figure out what to do with their toy basket...because that was what I originally had intended the fabric for! 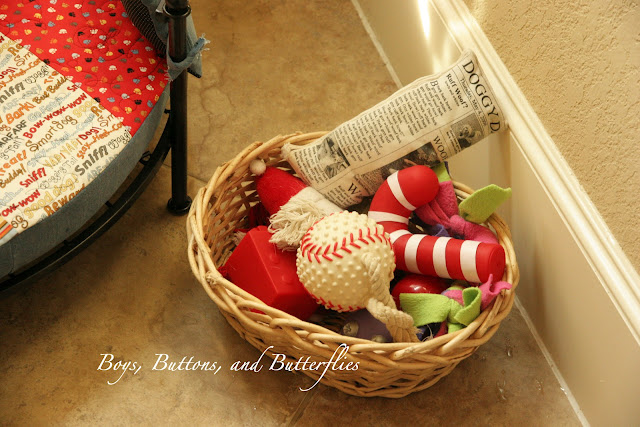 The room still needs a little something.  I am partial to the photo collage I made when I had the three boy pugs together.
But now it is just Prancer and Biggio. I don't have a picture of her in there! 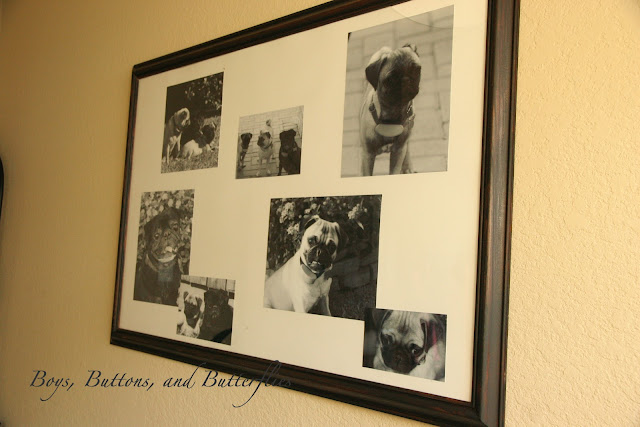 The boys picked out this poster a long time ago, so it is a keeper. 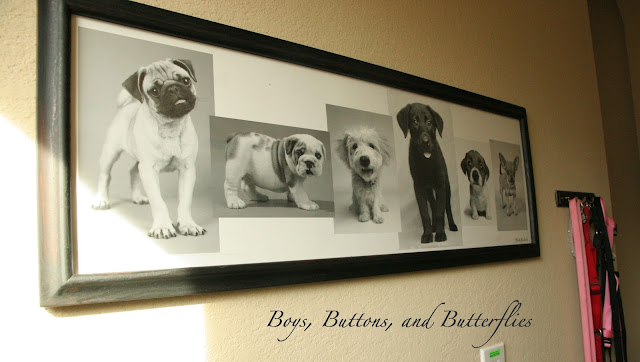 But my corner rack needs some cleaning up!!  Especially the dog food bin at the bottom! 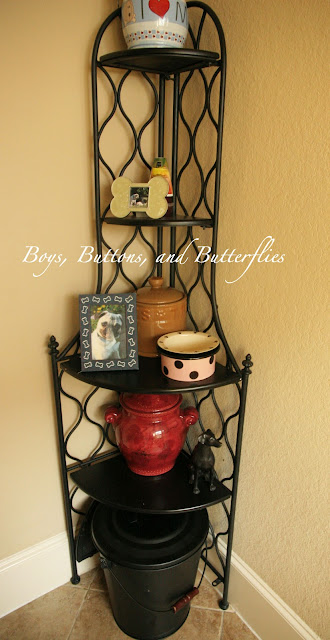 I am thinking some paint treatment, or bead-board and maybe new curtains.  But Button babbled that he liked the bed, so we will just enjoy it for now! 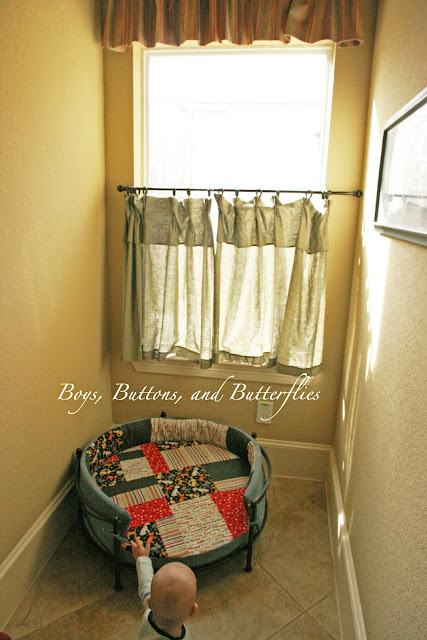