Keeping "Christ" in Christmas at our school is a beautiful thing. 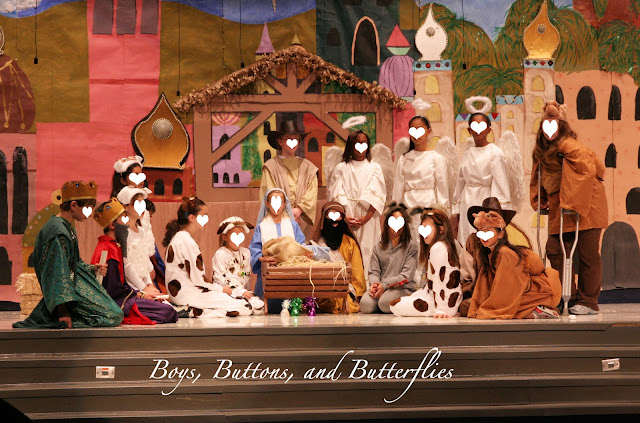 If only it wasn't the 8th year that I have been on the Costume Committee.
Usually, I am a one-woman committee.
I am sharing the costumes this year, because I have had a few followers wanting to see them.  I am actually a bit embarrassed that I spend so much time on them and they aren't really much.  But I have used about 95% of the material that our local Joann's donated to us about 7 years ago.  It was quite a boon!
This year was a great year, though!  There were a few moms who volunteered...one who is a scrapbooking buddy.  I love when she helps because I can just concentrate on alterations/sewing/creating and she just keeps all of it organized!!!
I also needed a lot of help because the music teacher had to do TWO plays in one. 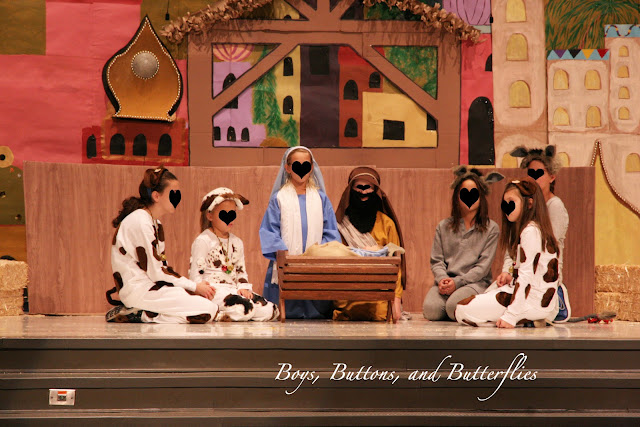 Two Mary's, two Joseph's, etc.   I concentrated on the main players, and the other moms embellished the animal costumes (except the camels).  They cut out spots for the cows, glued feathers and cotton balls for the chickens and sheep, and the donkeys had tails!  The music teacher's sister made the animal headpieces too...phew! 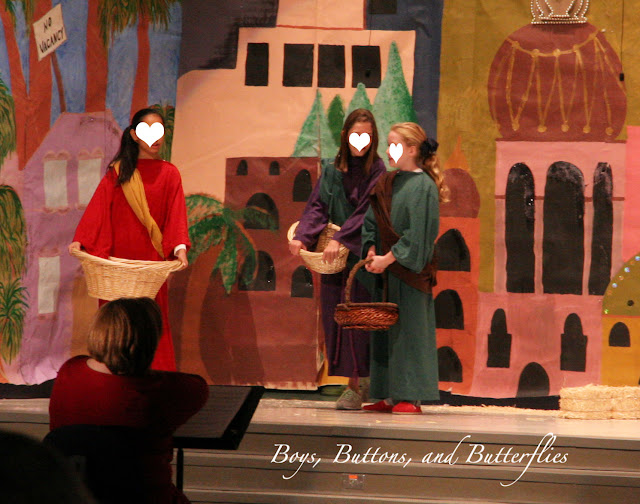 All of the costumes I make are based on one type of pattern.  A gown.  Either the sleeves are narrow, like the townspeople above, the shepherds, and Mary and Joseph.  The wise men, angels, and camels have really wide sleeves. 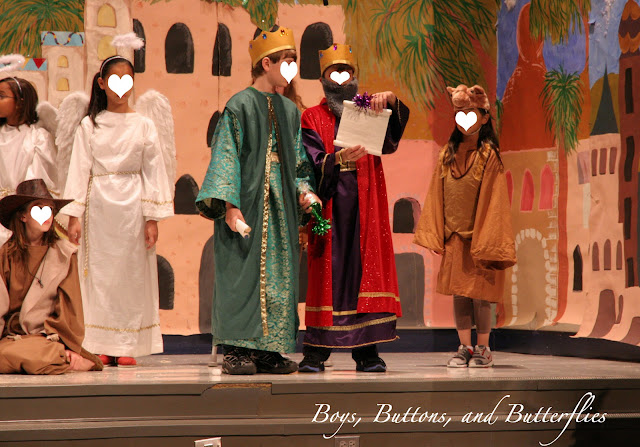 I make them different by using various shades of colors and embellishing or adding pieces to their costume.
The shepherds have waist-length vests that are from fleece.  Rope ties for belts. Cowboy hats for the first play and pink bandannas for the second...they are based on the "type" of nativity story (some are more traditional, some silly and fun).
The wise men get longer vests.  I add a lot of gold ribbon and ric-rac with gold cummerbunds.

Townspeople and innkeeper get sashes. 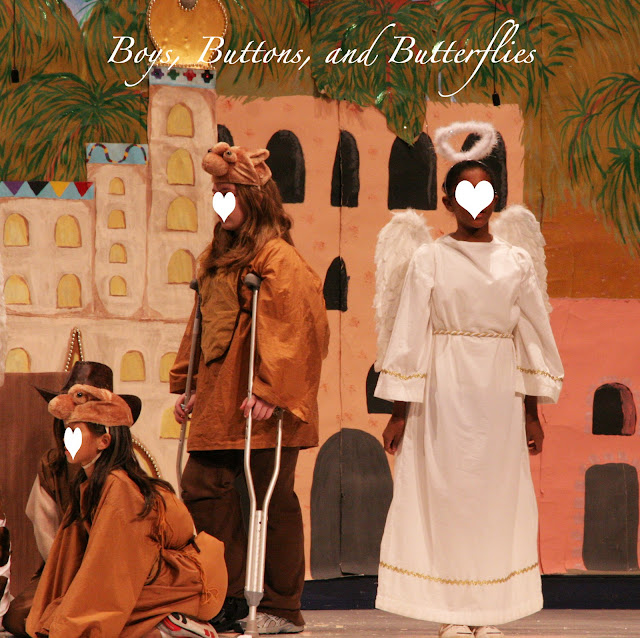 The angels have gold ric-rac and catalog-bought wings and halos.  We needed new ones this year.  The homemade ones were gone.  Even though they only wear them three times (one dress rehearsal and two shows) they get beat up quickly!
The camels were something I came up with last year.  Humps attached to waist-length tops.  They are filled with batting and they are using camel heads and the vest that comes with it from a catalog.  Not my most favorite costume.  I am considering a revamp next year.
And here is my special performer of the evening...the third and fourth graders are the "choir" and boy...they did a lot of singing with two plays this year! 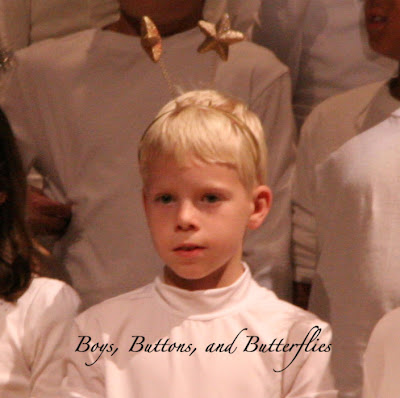 They usually get special accessories themselves. The girls had small halos and the boys gold stars.
I don't know if you recall, but I used to be the school nurse at the school.  The kids are fascinated with Button since they watched him grow in my tummy last year.  They feel a special connection.
So does a fellow staff member who stuck him in the manger after yesterday's morning performance. 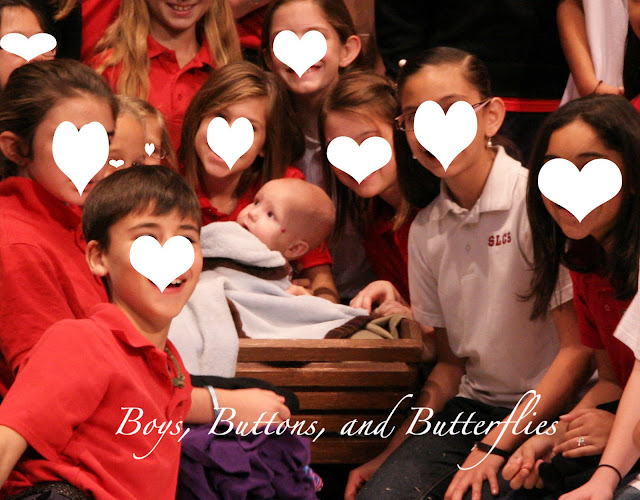 He wasn't so sure!
After the evening performance, Bunny has a tradition.  He asks Mr. Boss if we can celebrate.

at our favorite ice cream shop. 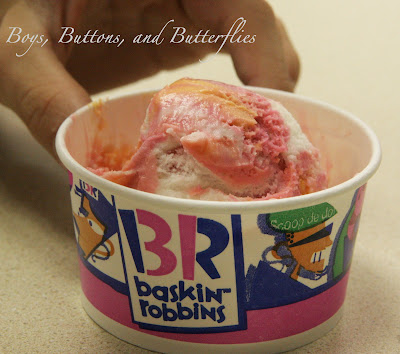 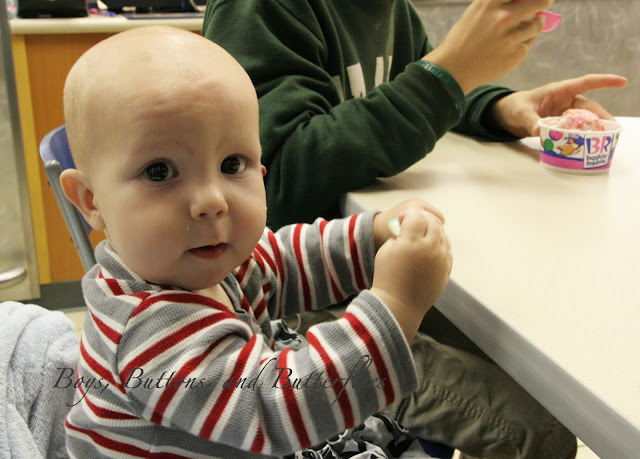 We are actually a little sad, because it just might be our last year. 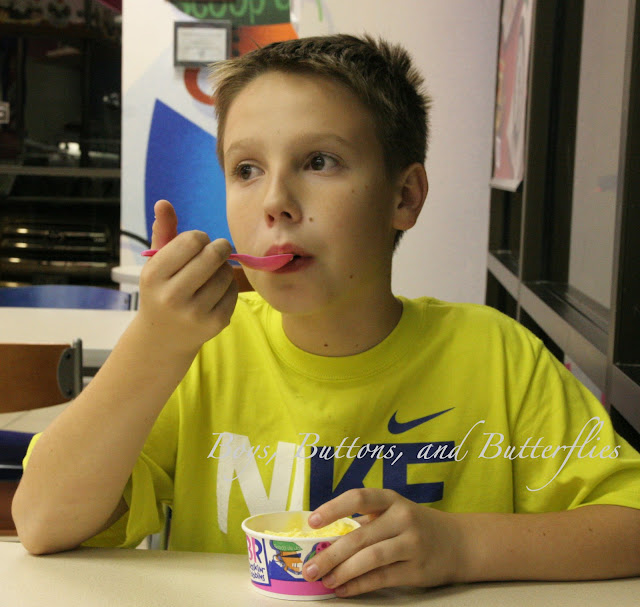 If Bunny joins Band instead of Music next year.... 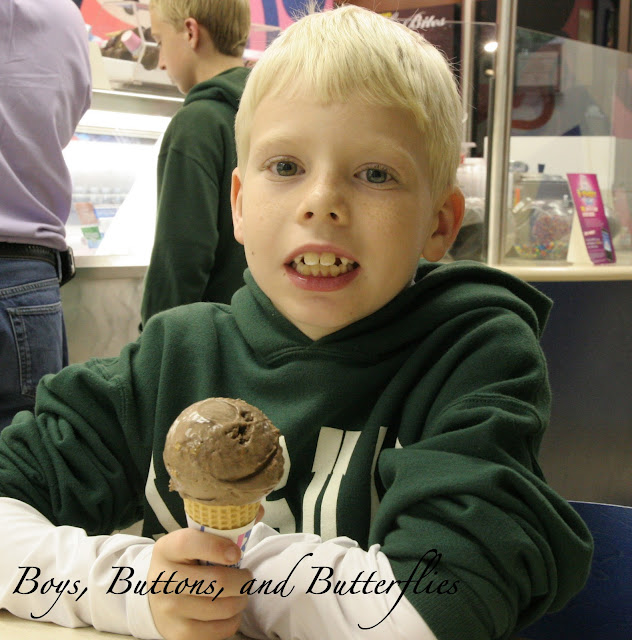 But Button likes Chocolate Ice Cream like his daddy so much..... 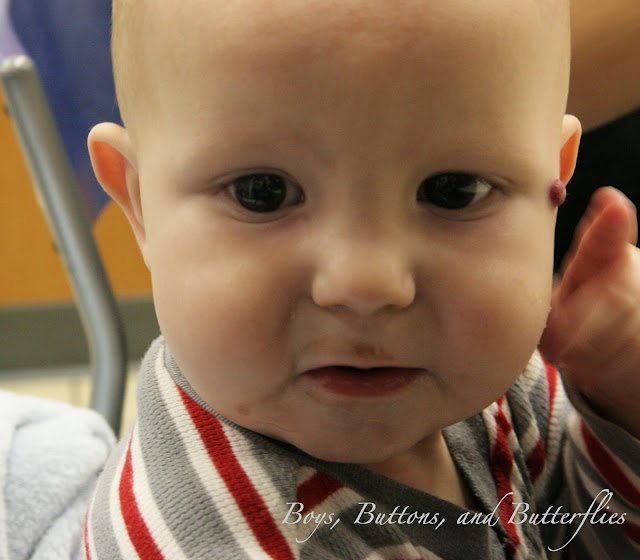 I think that they might be able to convince Mr. Boss to celebrate after Bean's Band Concert next week.
A new tradition?